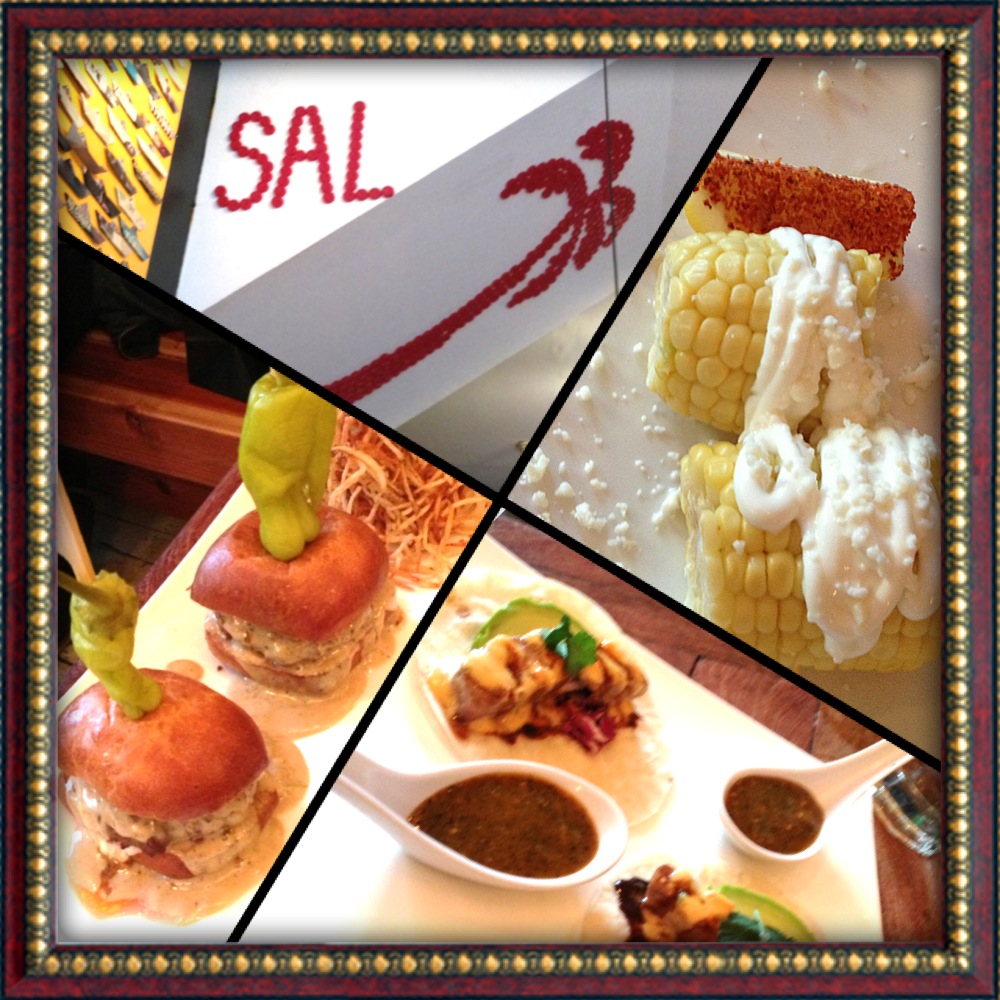 Corn on the Cob, Tuna Tacon, and Lamb Sliders

After an especially busy day at work, I was so excited to meet up with a friend in the Mission to prance around and get dinner at Lolo’s. We weren’t sure what to expect as neither of us had been to – or even heard of the restaurant before. But it had great reviews on Yelp, so naturally that’s where we headed! 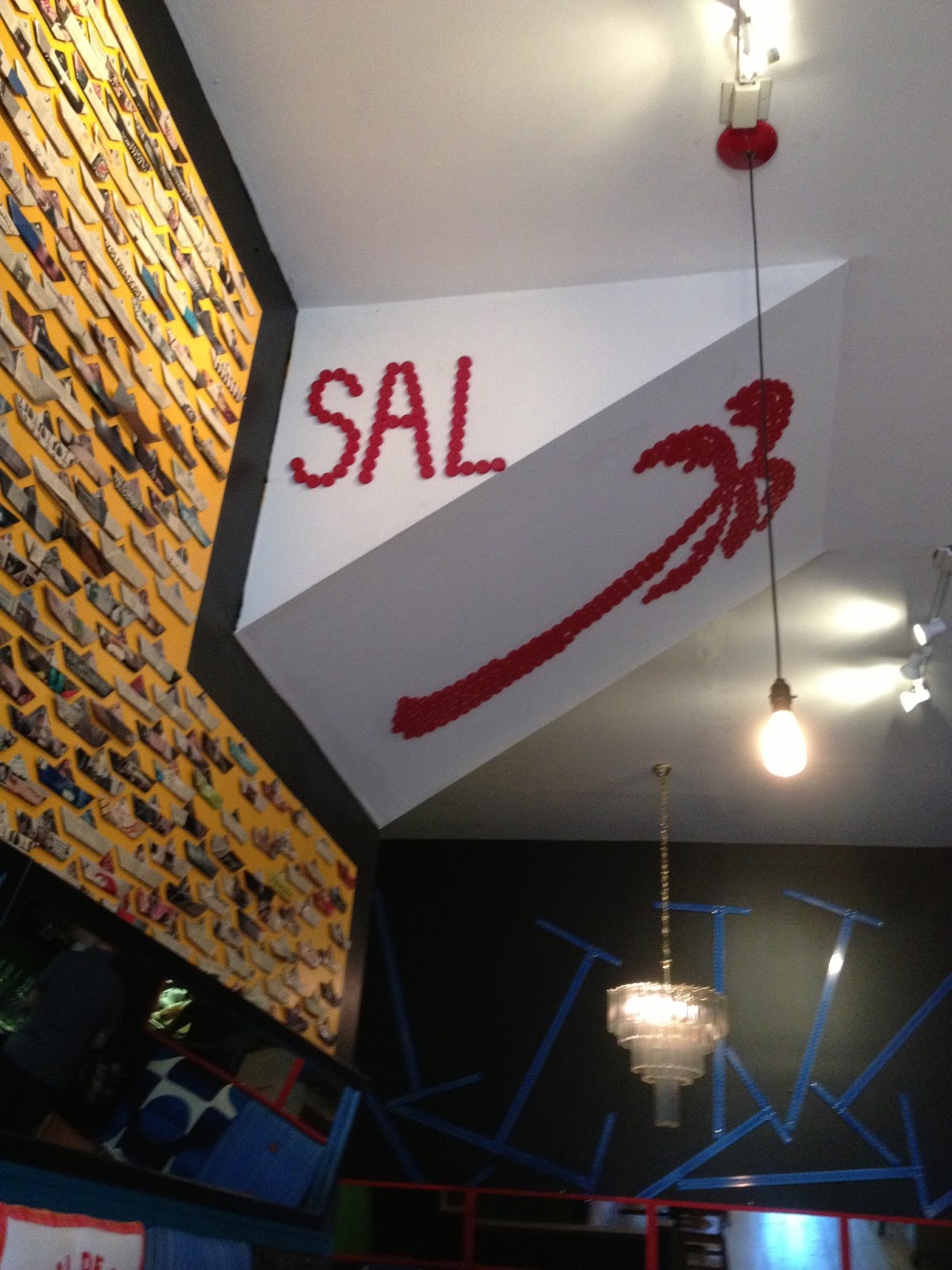 When we arrived, we were both pretty much floored. Every inch of Lolo’s seemed to be decorated brightly and creatively. 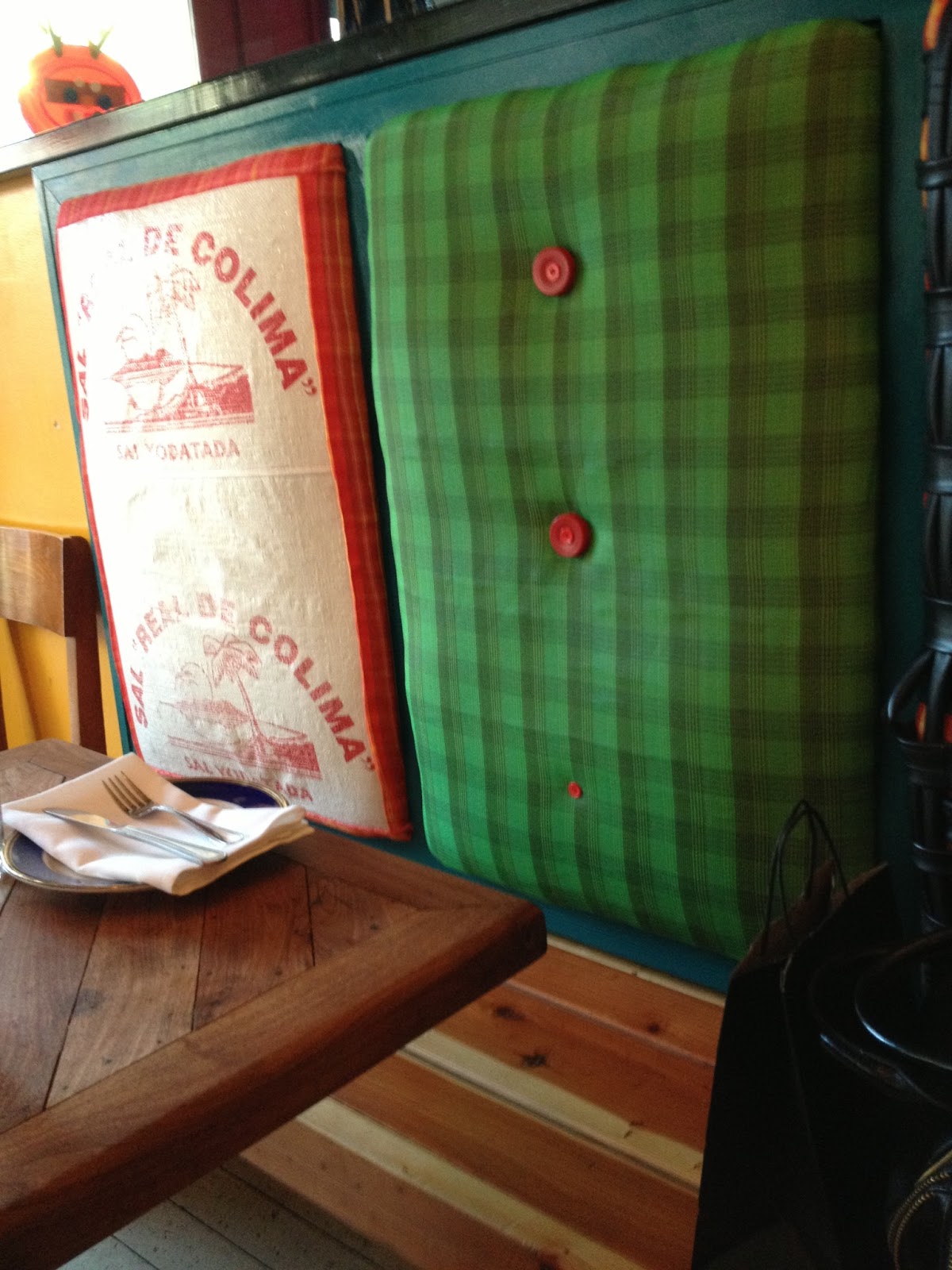 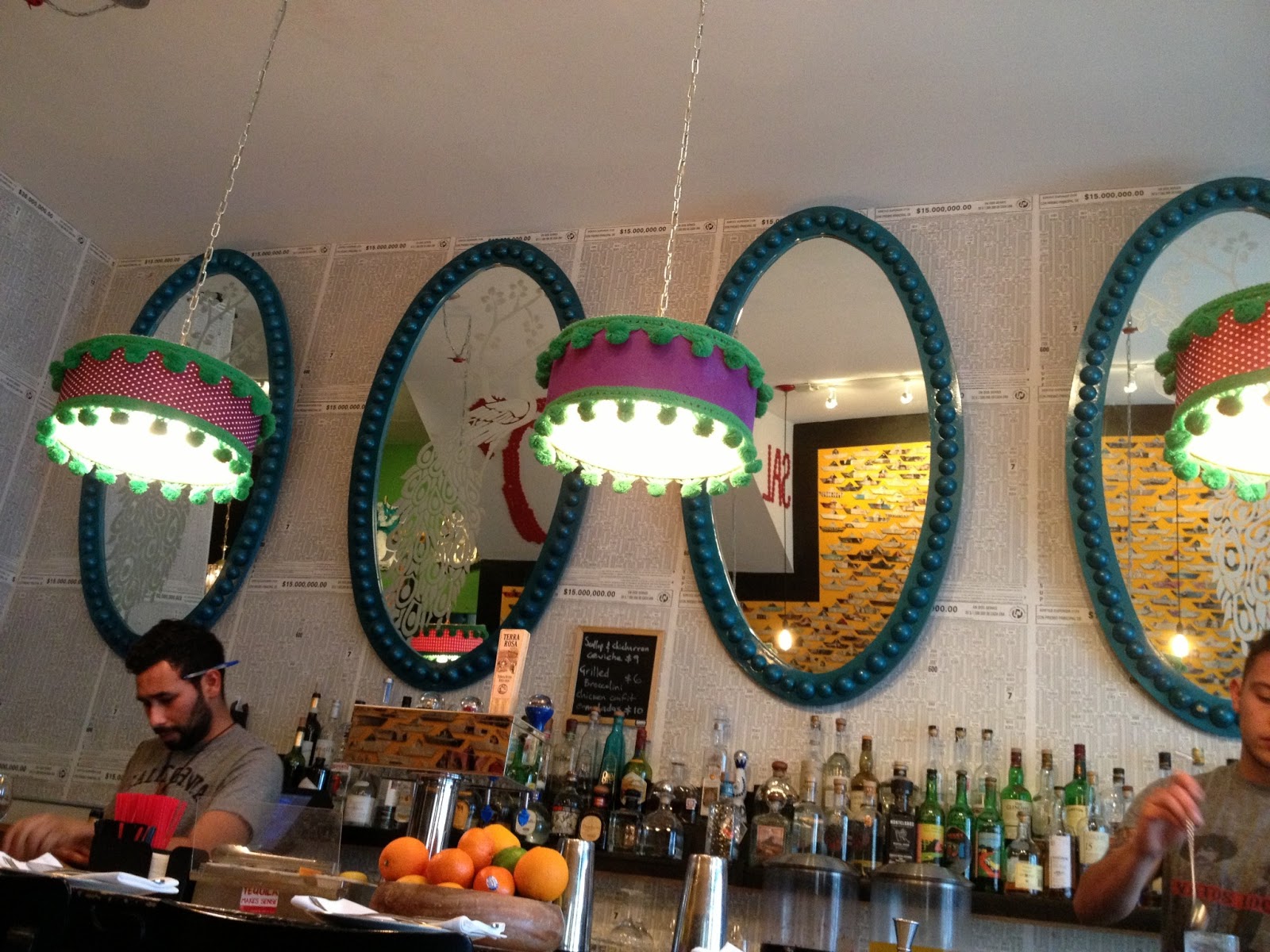 So we were obviously having fun just looking around before we even ordered! I absolutely love when a restaurant’s atmosphere makes me feel like I’m on vacation, and this is a great example. Lolo’s was the visual equivalent of Disneyland. At this point the food could have been mediocre and we probably would have still been happy with our restaurant choice.

Lolo’s is a tapas restaurant, which means you order 3 or 4 small meals and split everything. Before I show you the joys of what we ordered, here is the complimentary bread and sauce that came out as an appetizer: 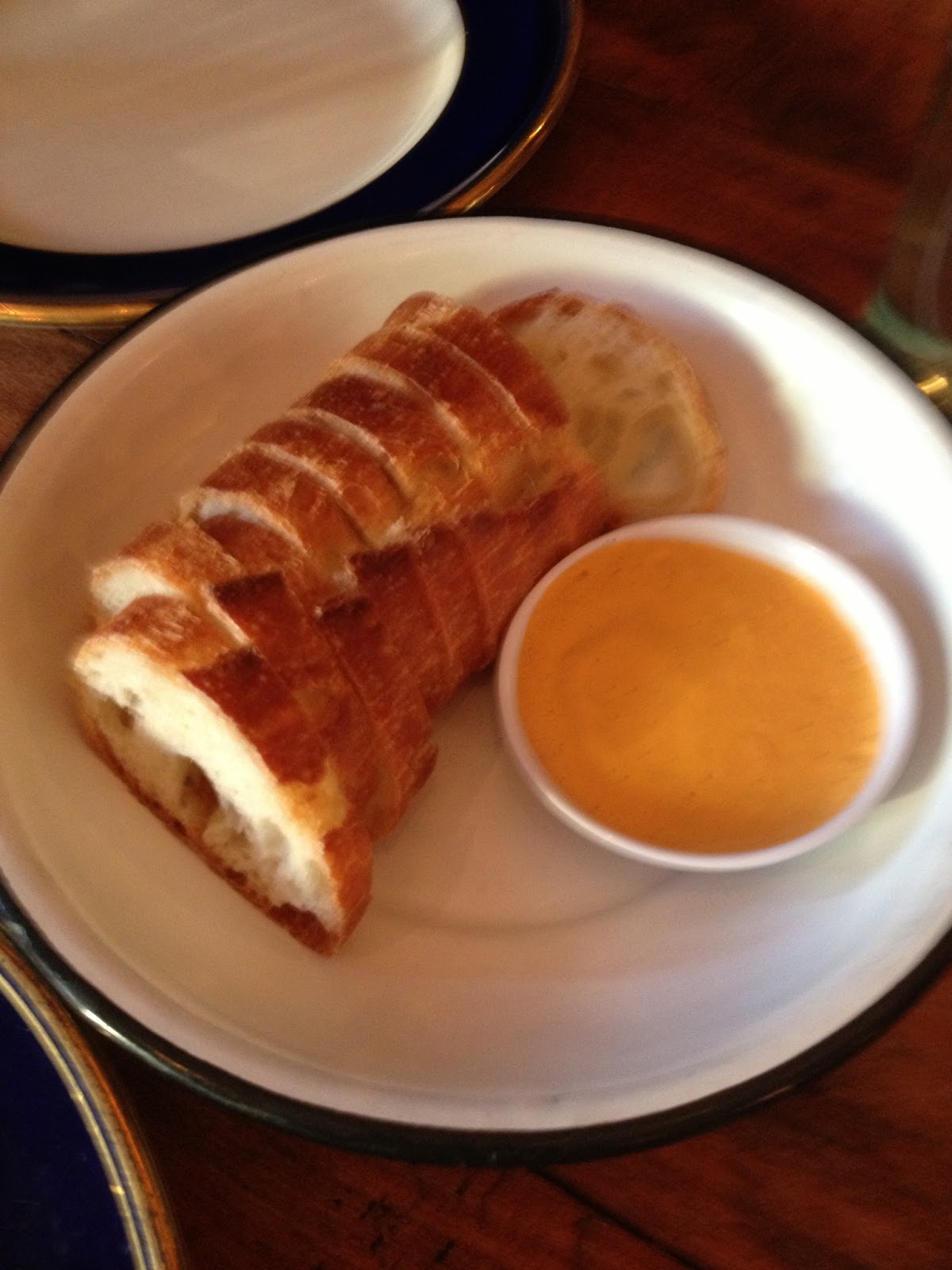 Nothing about Lolo’s was ordinary. Not even the appetizer. Straying from the typical bread and butter, we were given a delicious assortment of sourdough bread and garlic cheese. It tasted kind of like nacho cheese with a kick, and it was super addicting. 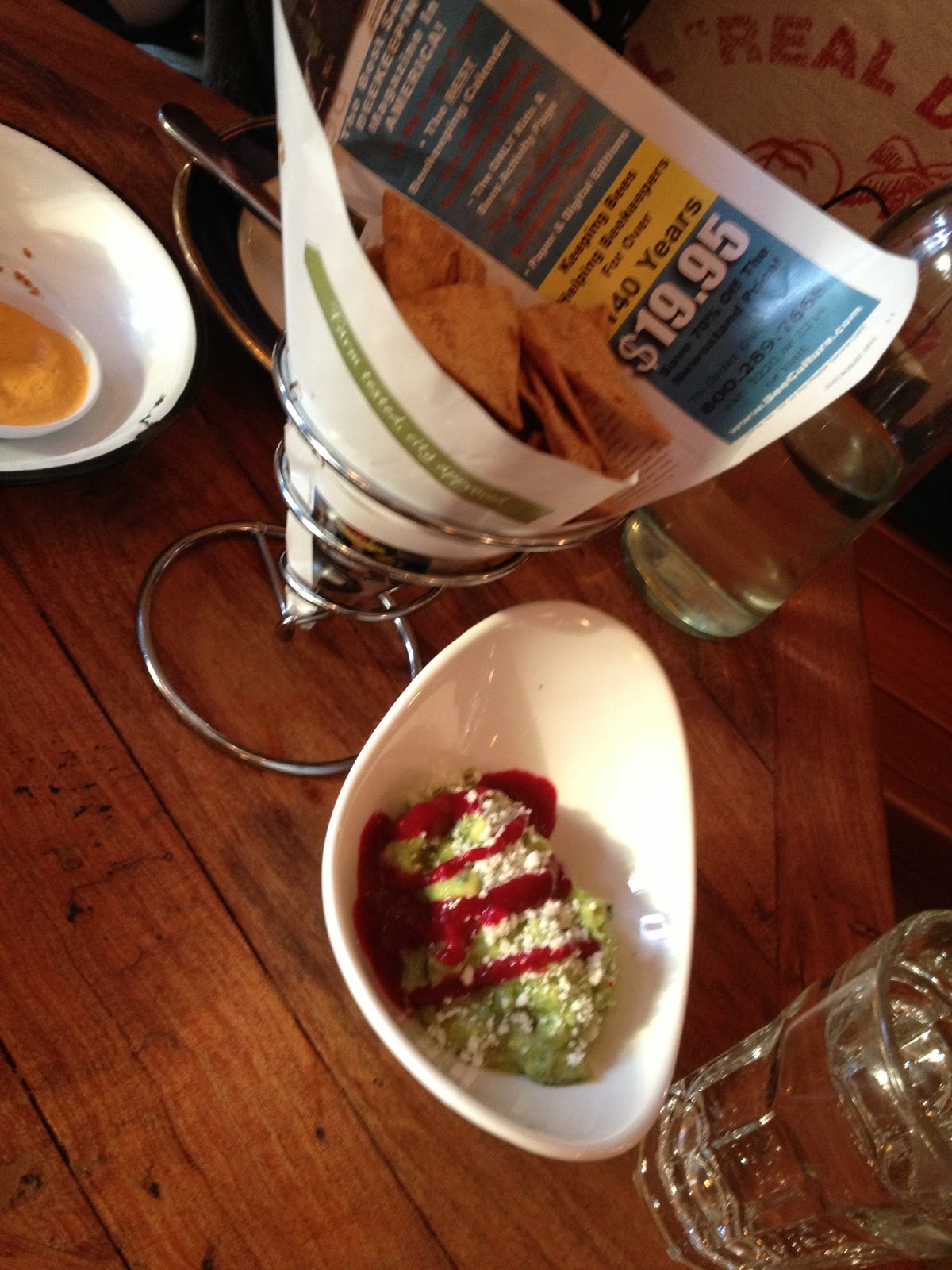 The first thing we ordered was the classic guac & chips, with a twist. The guacamole was topped with cotija cheese and a mystery red aioli of some kind. To save you the google search, cotija cheese is a hard cow’s milk cheese that originated in Mexico. The guacamole ingredients were all fresh and light, and it was refreshing to have a new take on the classic guac! Yes, the blue corn chips came wrapped in a page of a magazine. Some people may question how sanitary this is, but my friend and I didn’t mind. We were distracted by the decorations and delicious food. 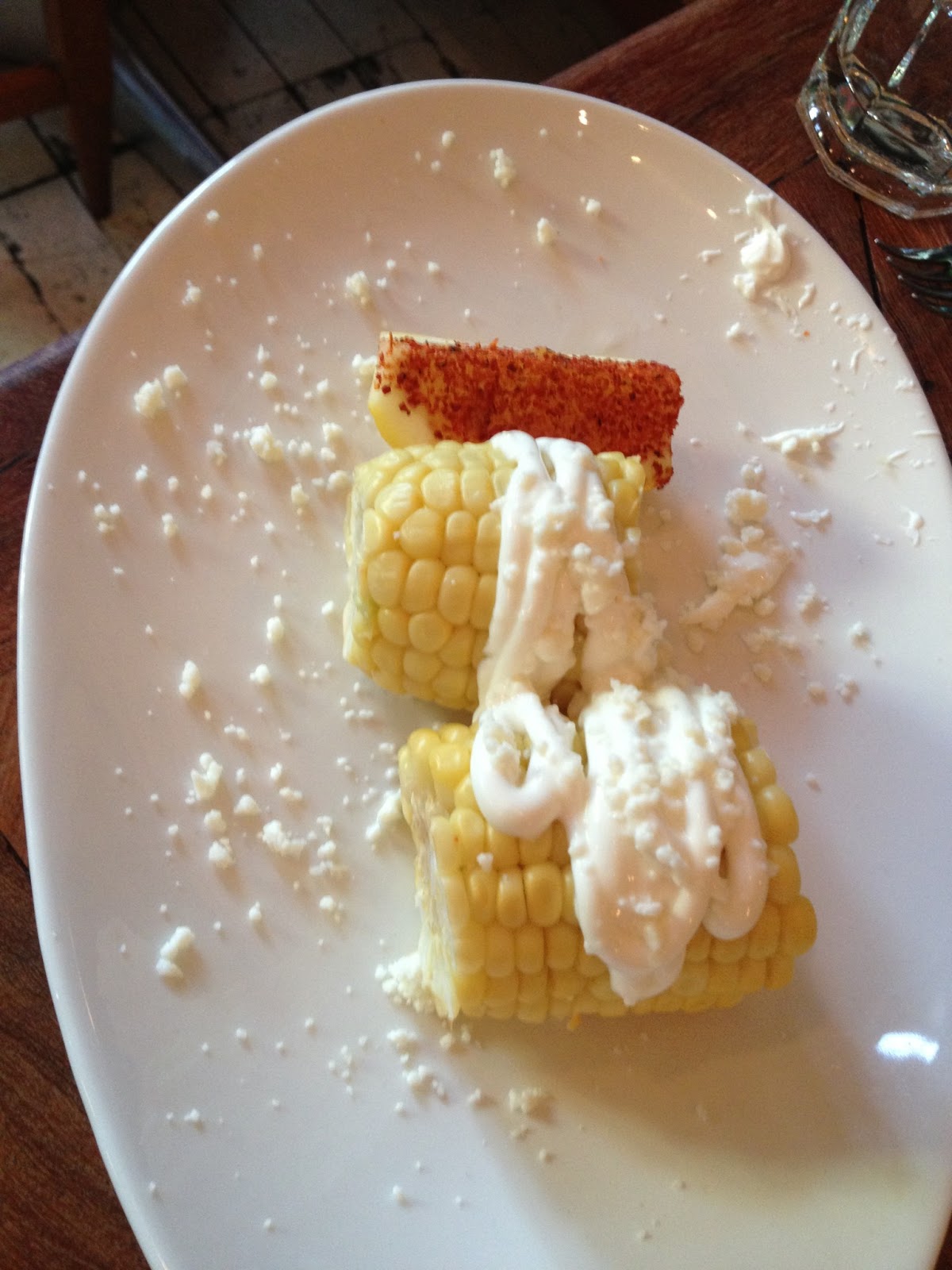 Corn on the Cob, topped with cheese and a side of lemon

Looking back on it, I’m not sure the ingredients in this one were worth the price of the plate. It’s not that it wasn’t tasty, because it was, but it was just an ear of corn, boiled in a pot of water and with some cheese drizzled over it. That said, I’ve never had corn on the cob with cheese before, and it really was good. Messy, but good. 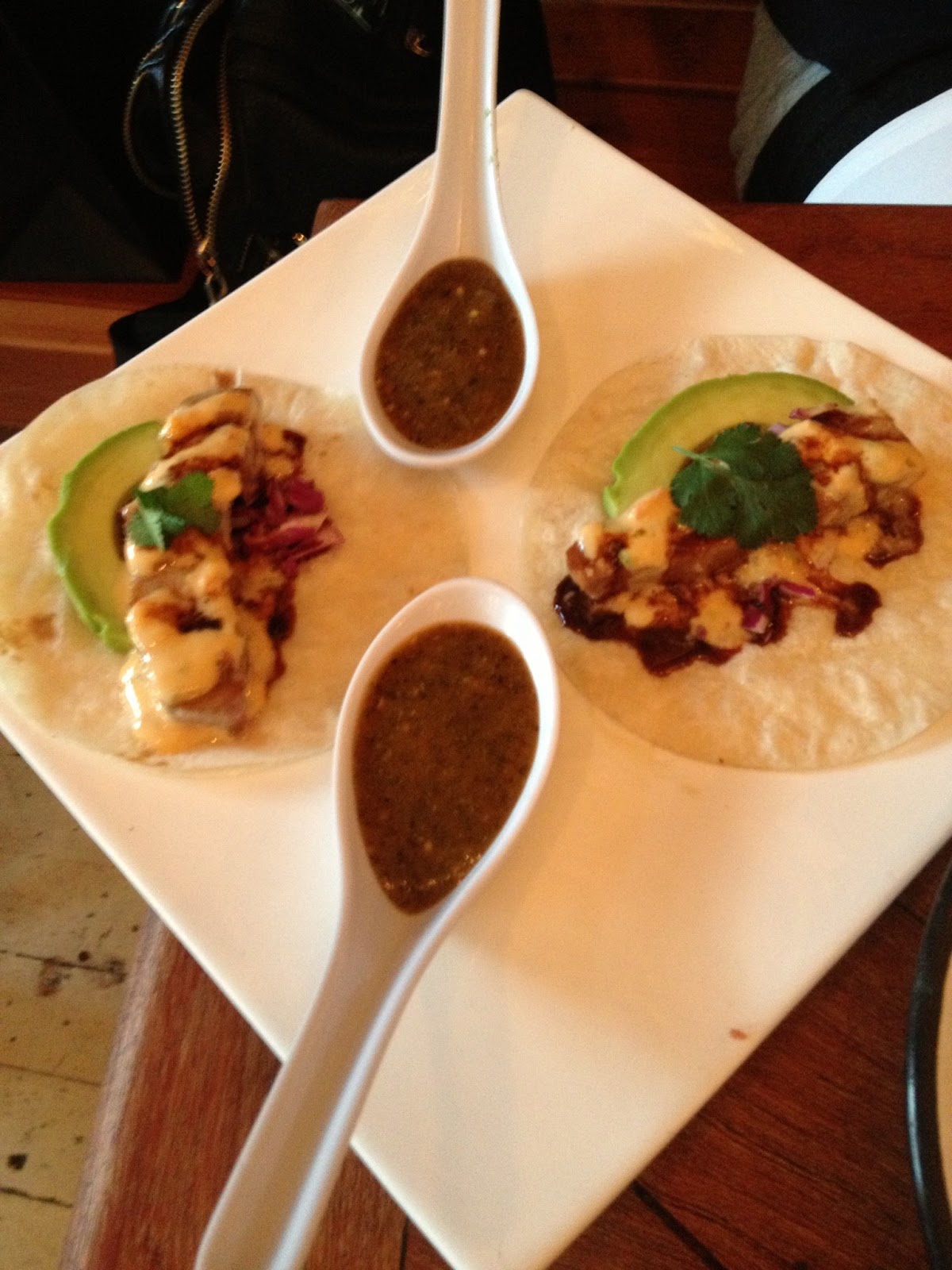 The Tuna Tacon was our third plate. We received seared albacore tuna, shellfish aioli, and avocado on flour tortillas, with roasted tomatillo sauce on the side. After taste testing the sauce to make sure it wasn’t too spicy (it wasn’t spicy at all, but sweet and delicious), I poured it on the tuna, rolled it up, and took a bite.

It was at this point that I remember declaring the Tuna Tacon was the most delicious thing I’ve ever tried. It really did not taste like tuna, or fish of any kind. It was sweet and colorful and we could’ve honestly eaten ten more. 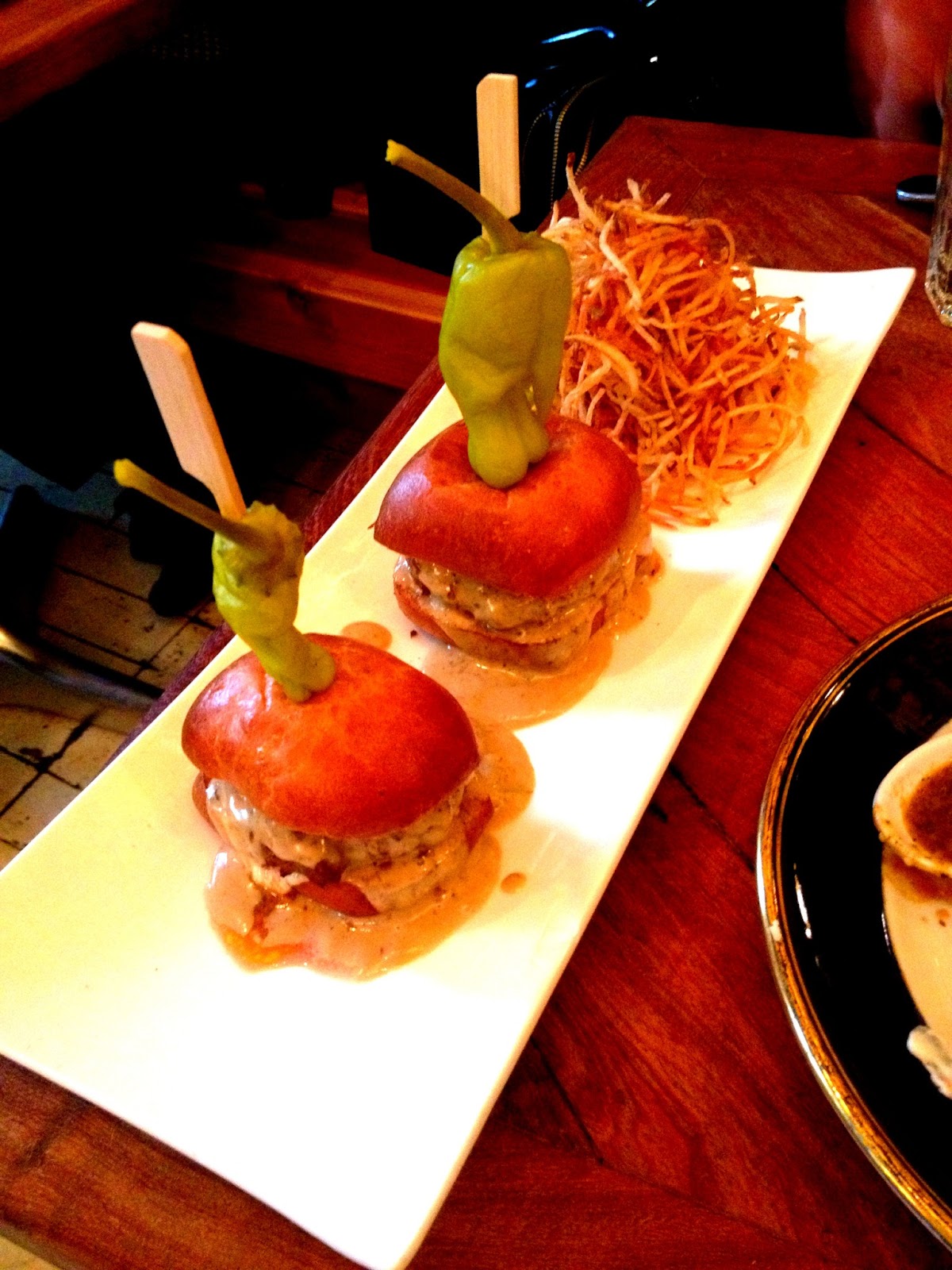 Our fourth and final plate arrived – the Lamb Sliders. They came on brioche buns, with jalapeno peppers skewered into them for a splash of green show. The lamb was drizzled with yet another delicious sauce, which turned out to be porcini mushroom sauce. Mental note, check!

I already am a huge fan of sliders, but I had never tried lamb sliders before this night. And they were just perfect! The sweet sauce was messy but so delicious and addicting that you didn’t even care. The table next to us, after seeing the slider’s display and hearing us raving, leaned over and asked about our meal. It was that good. 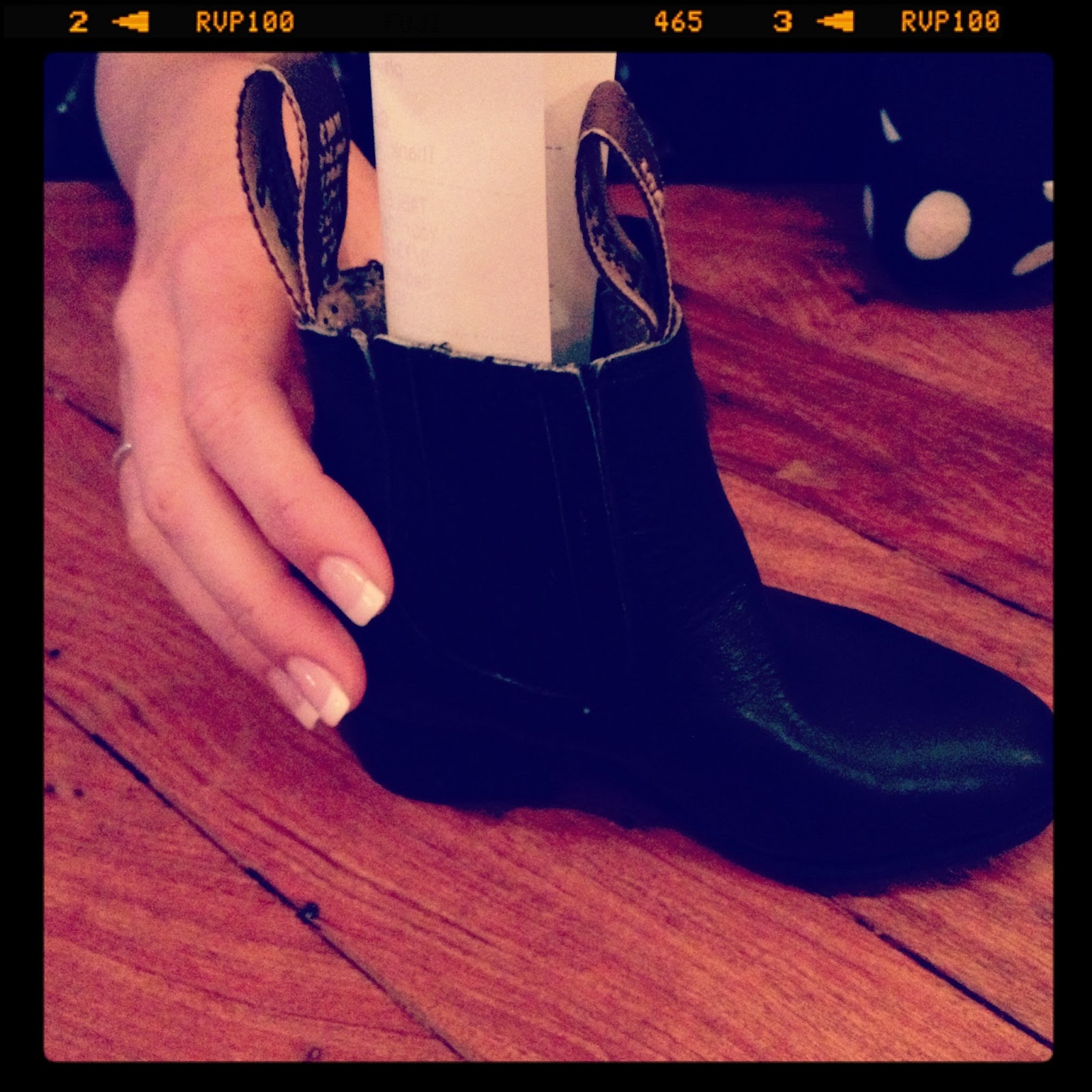 Perhaps best of all, our bill came in this little leather boot! Almost too cute to handle. And shout out to Ashley’s perfect french manicure!

Our overall experience at Lolo’s – from the decorations, to the great service, and especially the food, was so overwhelmingly positive that I’m determined to go back and eventually try everything on their menu! I would recommend Lolo’s to anyone, whether they are an SF native looking for a new dining spot, or a tourist wanting to get a real feel of the city.

Thanks for reading & Happy eating!