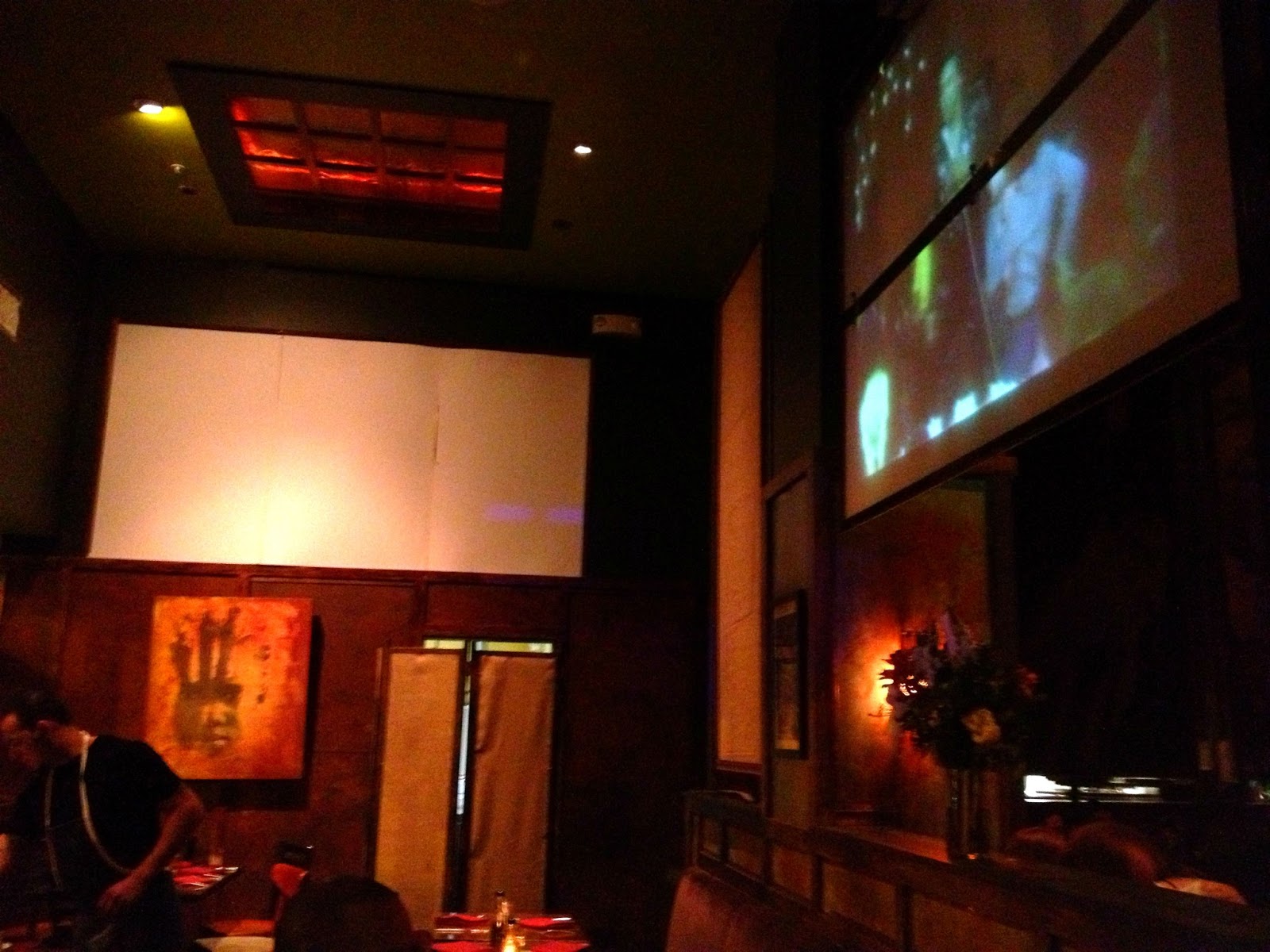 Upon entering Farmer Brown, you can tell they are going for a hip, industrial vibe. They had a DJ pumping music from his corner booth, and Soul Train videos projected on screens throughout the venue. I was hopeful.

Sadly, these complimentary Mini Cornbread Muffins were the highlight of my Farmer Brown Dining experience. They were delicious, not too heavy, and free. I should have stopped after these.

I do wish they had told us we were going to receive these complimentary muffins when we ordered our Angel Biscuit appetizers. The combination of muffins and biscuits was pretty filling even before our entrees came out. 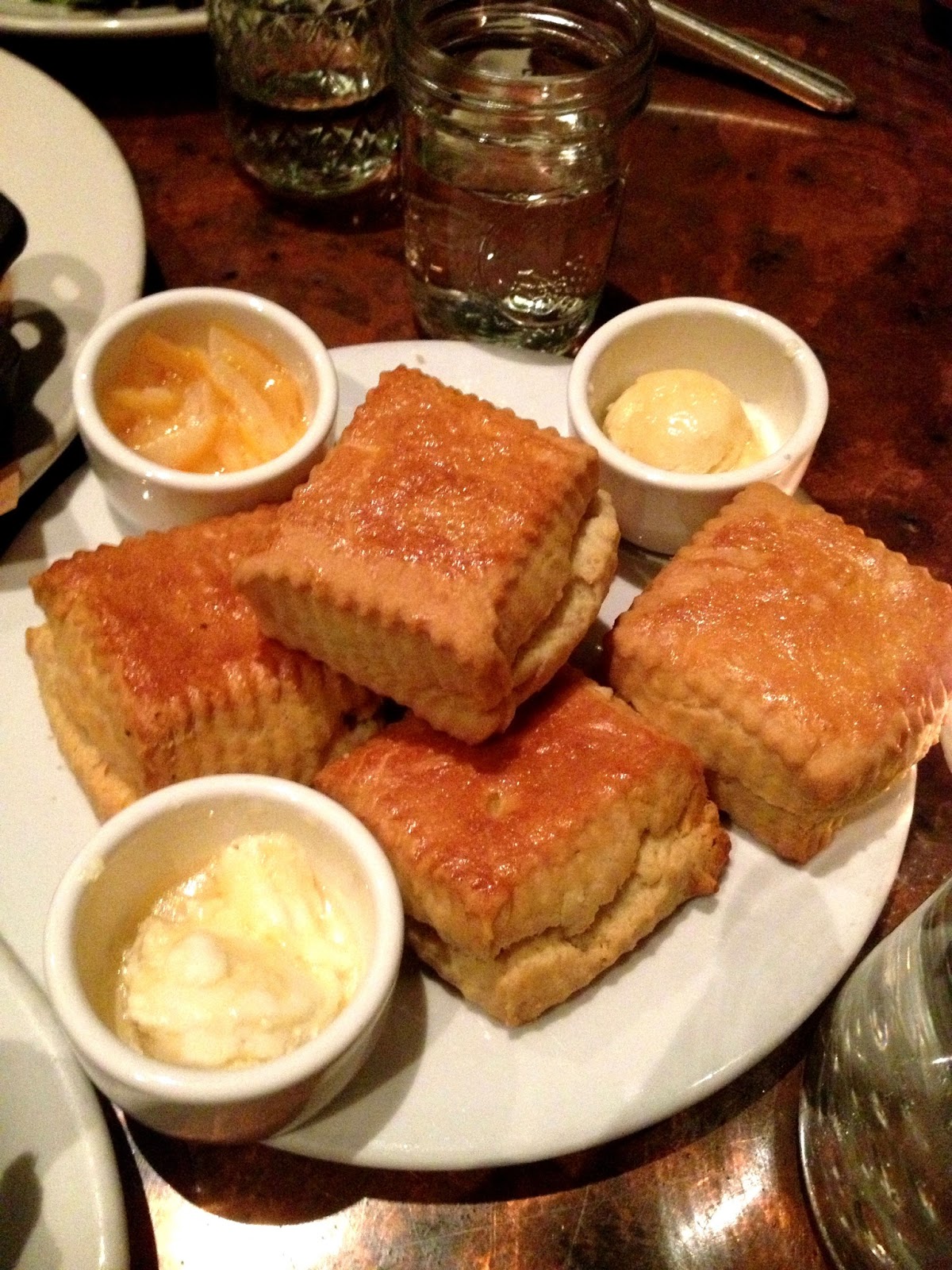 Again, I think I would have enjoyed these Angel Biscuits and Honey Butter more if we had not been given delicious cornbread muffins to eat right before. 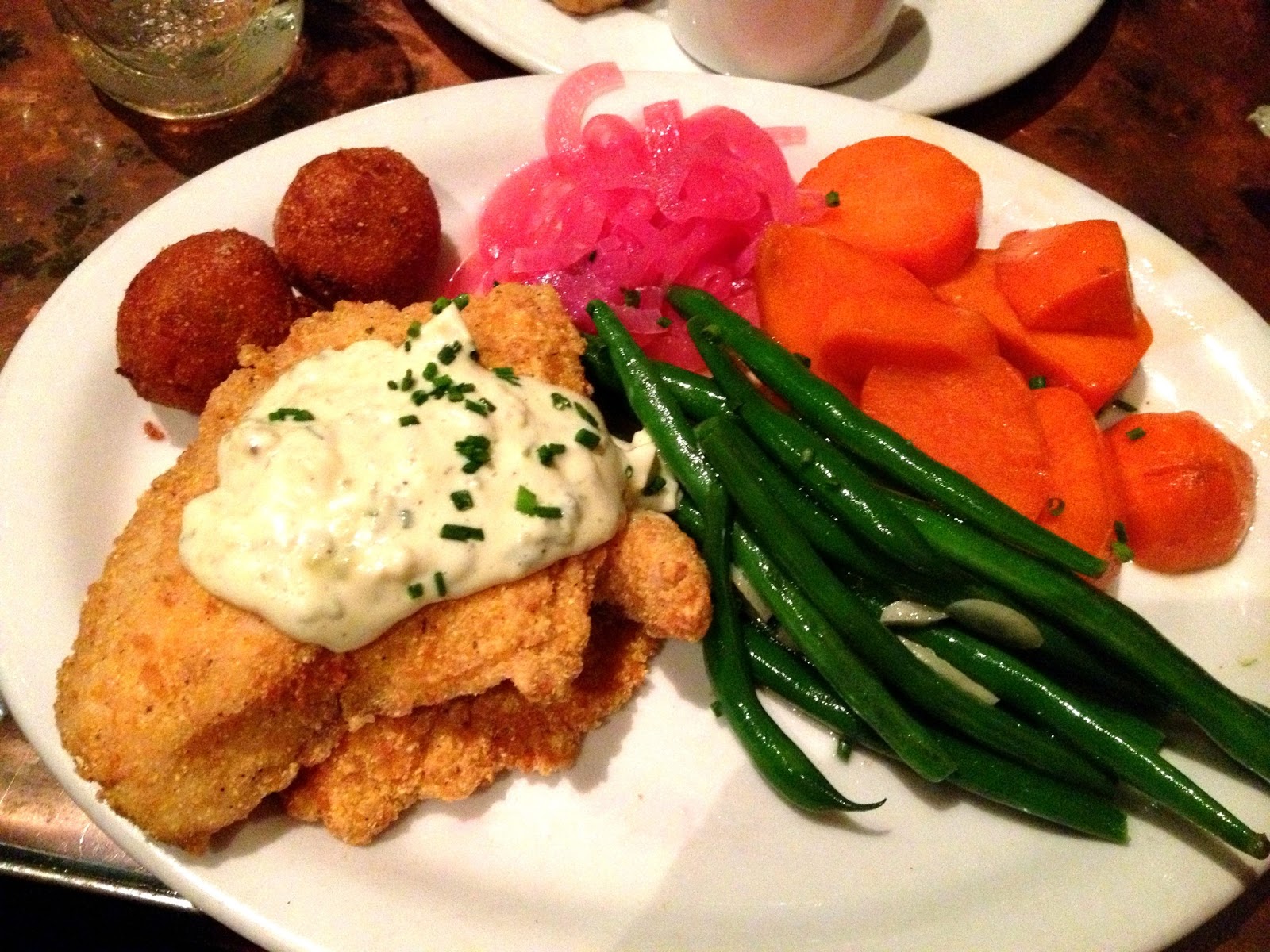 Looks good, right? It’s just too bad I had to wait until my party was 3/4 done with their plates to receive it – and no discount offered. They originally brought me the fried chicken, though I ordered this plate of Crispy Cornmeal Catfish, with hush puppies, candied yams, pickled onions, garlic green beans and sauce gribiche. I would have given points for the large portions, but because it came so late this was more of a nuisance than anything. By the time it arrived I was forced to rush through my meal, and ended up taking a large portion of it home. I’m all for leftovers, but reheated catfish is not too appetizing! The food was very heavy – fried cornmeal catfish with gribiche (mayonnaise-like sauce), fried hushpuppies, even the green beans were doused in some sort of buttery glaze. The taste was not bad, but it was the sort of meal that sits heavy in your gut and makes you want to do nothing but succumb to food coma. There was no light, healthy portion to the plate to offset all the fried, greasy ingredients. 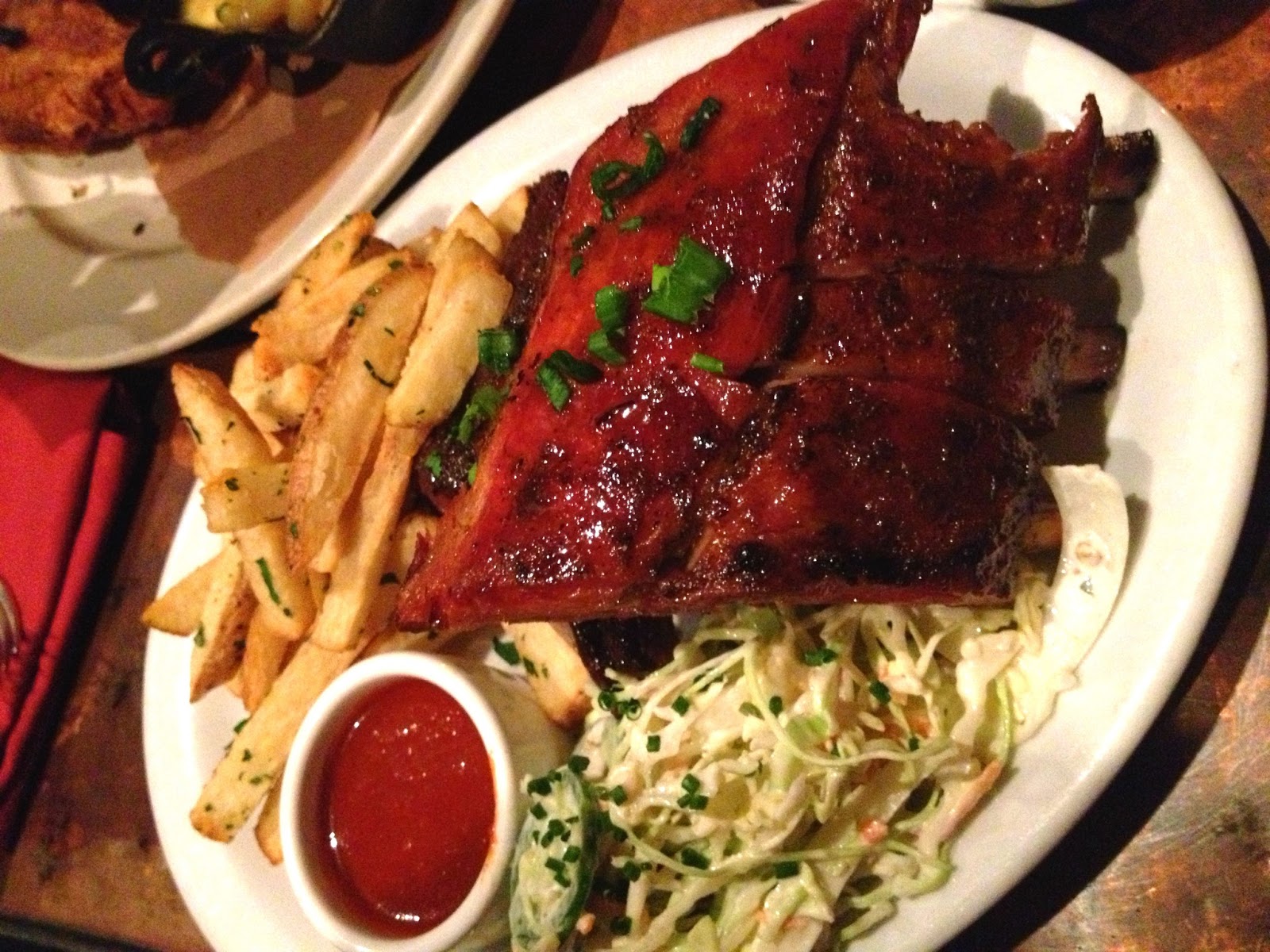 Chester enjoyed his classic Rib Plate, which came with steak fries, jalapeno coleslaw and a side of BBQ sauce. 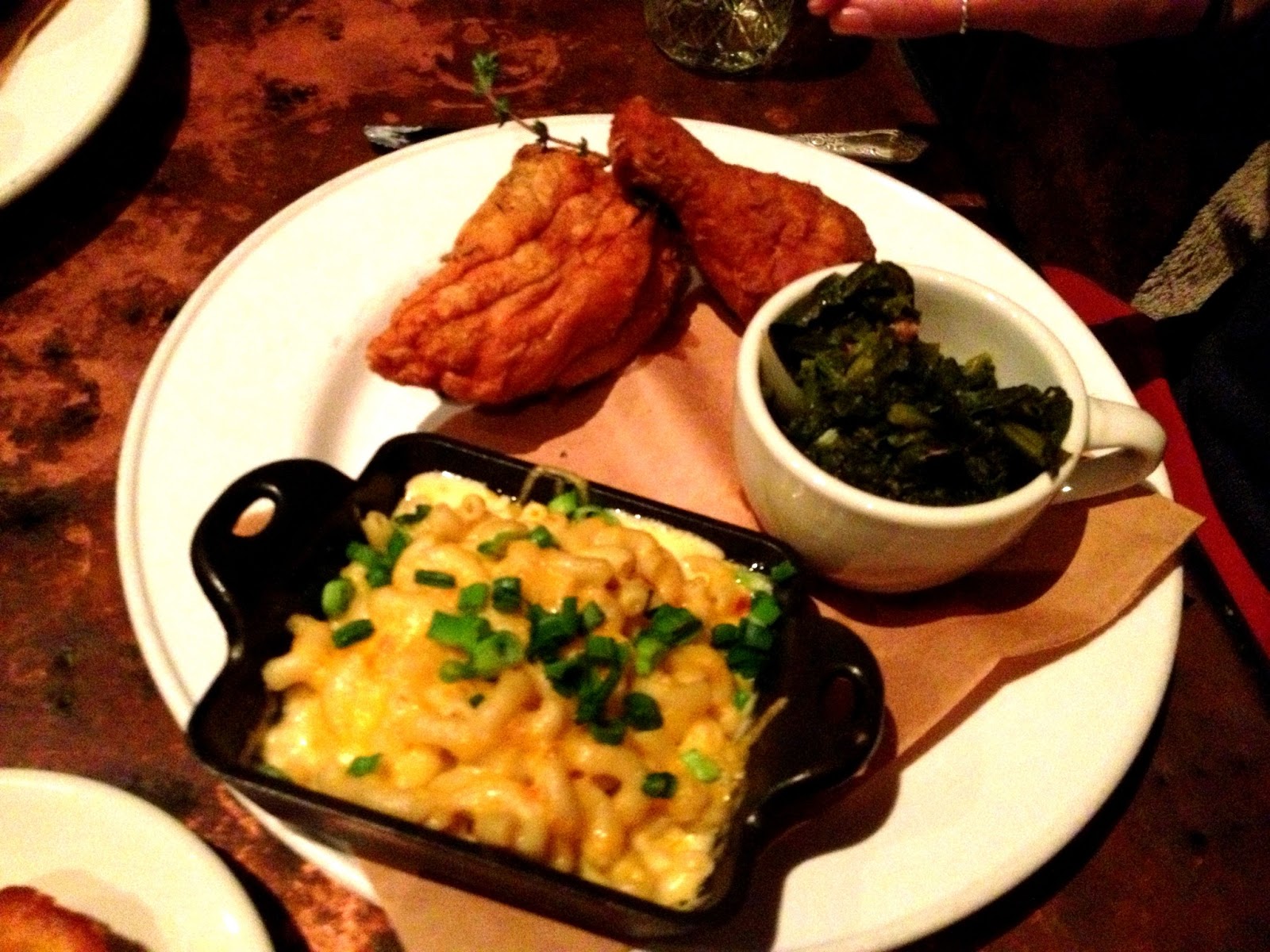 Chanda ordered the Southern Fried Chicken,which consisted of light & dark meat, macaroni & cheese and ham hock mustard greens. She was left unimpressed by the fried chicken, which is a shame considering Farmer Brown specializes in soul food. Our party entered into a conversation about great places to get fried chicken & waffles – such as Gussies and Roscoe’s. I think it’s a shame when a customer has to daydream about other restaurants to get through their meal. She also had to ask our waiter multiple times for a side of ketchup. 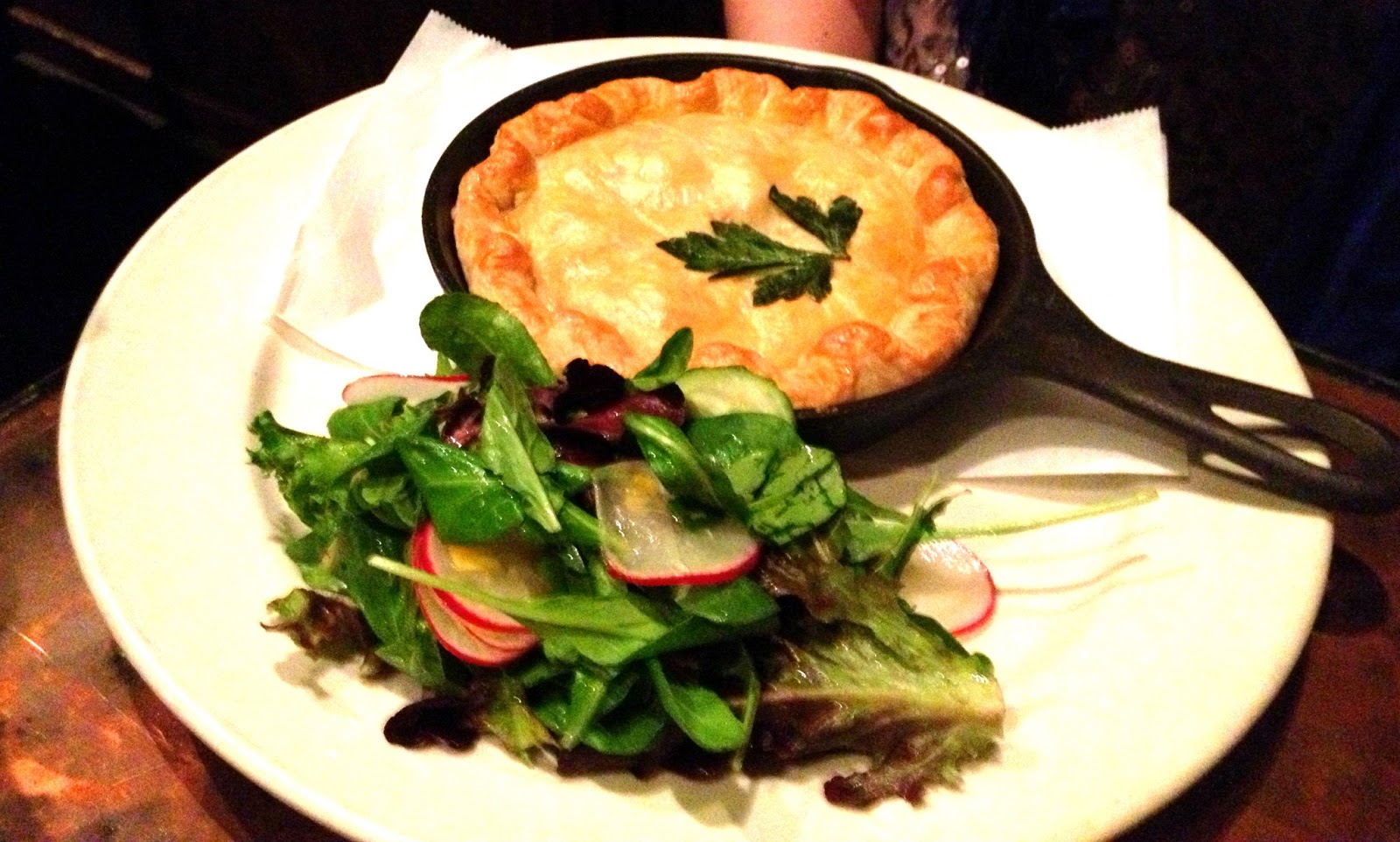 This was Rebecca’s first time EVER trying chicken pot pie. She enjoyed the meal, but mentioned that for the price she expected larger portions. I don’t blame her, considering the enormous portions given to my catfish and Chester’s rib order. It seemed the plate portions at FB vary depending on what you order.

Put simply, I would not place Farmer Brown’s at the top of my recommendation list. I went in excited by the ambiance – DJ booth, Soul Train, adorable Menu & delicious complimentary Mini Cornbread Muffins. Unfortunately I was unimpressed from there.

The staff was unfriendly, my order came out as the rest of my party was finishing their meals, and the food itself was very heavy and greasy. When the bill came, we were asked for an additional tip on top of the included 18% gratuity.

Though we unanimously voted to try Farmer Brown’s, it turned out less than spectacular and nothing to write home about.