As many of you know, I recently relocated to the East Coast! After a month of learning the T routes and getting my winter gear together, I am officially able to (usually) find my way around Boston’s winding streets without getting lost and confused – Just in time for Rayna and Alex to visit for the weekend!

Rayna flew in from back home (San Francisco), and Alex ventured up from NYC. Rayna had never been to Boston before, and Alex hadn’t been in a quite a while, so I made sure to show them the best of what Boston has to offer.

To me, of course, this means food.

I brought them to the North End, with its quaint brick buildings and cobblestone streets. After a quick stop at Paul Revere’s house, we headed around the corner to the famous Mike’s Pastry. 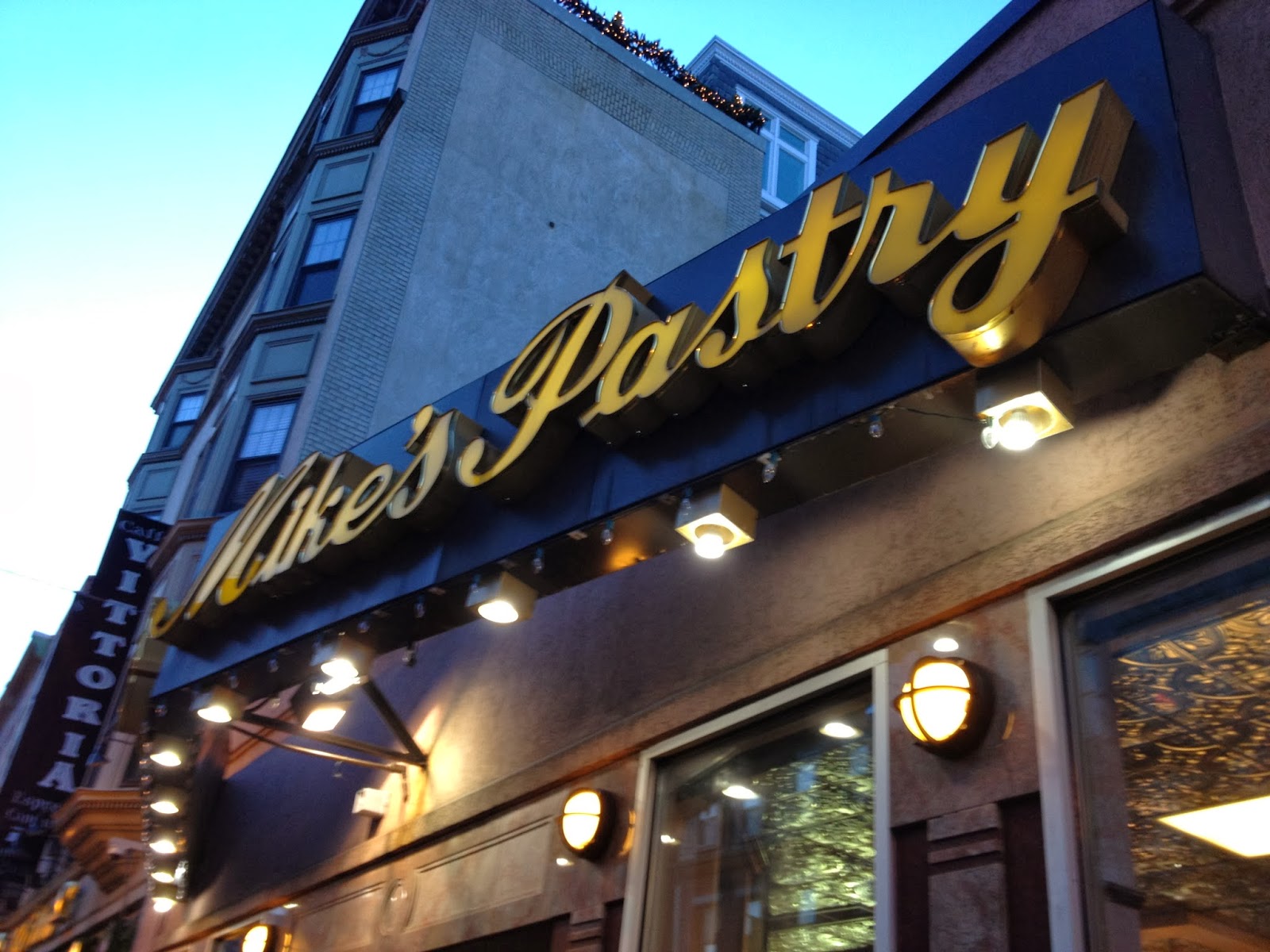 Mike’s Pastry is best known for its cannoli, an Italian (specifically Sicilian) pastry dessert and cuisine staple. They have a huge flavor variety, including pistachio, pumpkin spice, and amaretto. 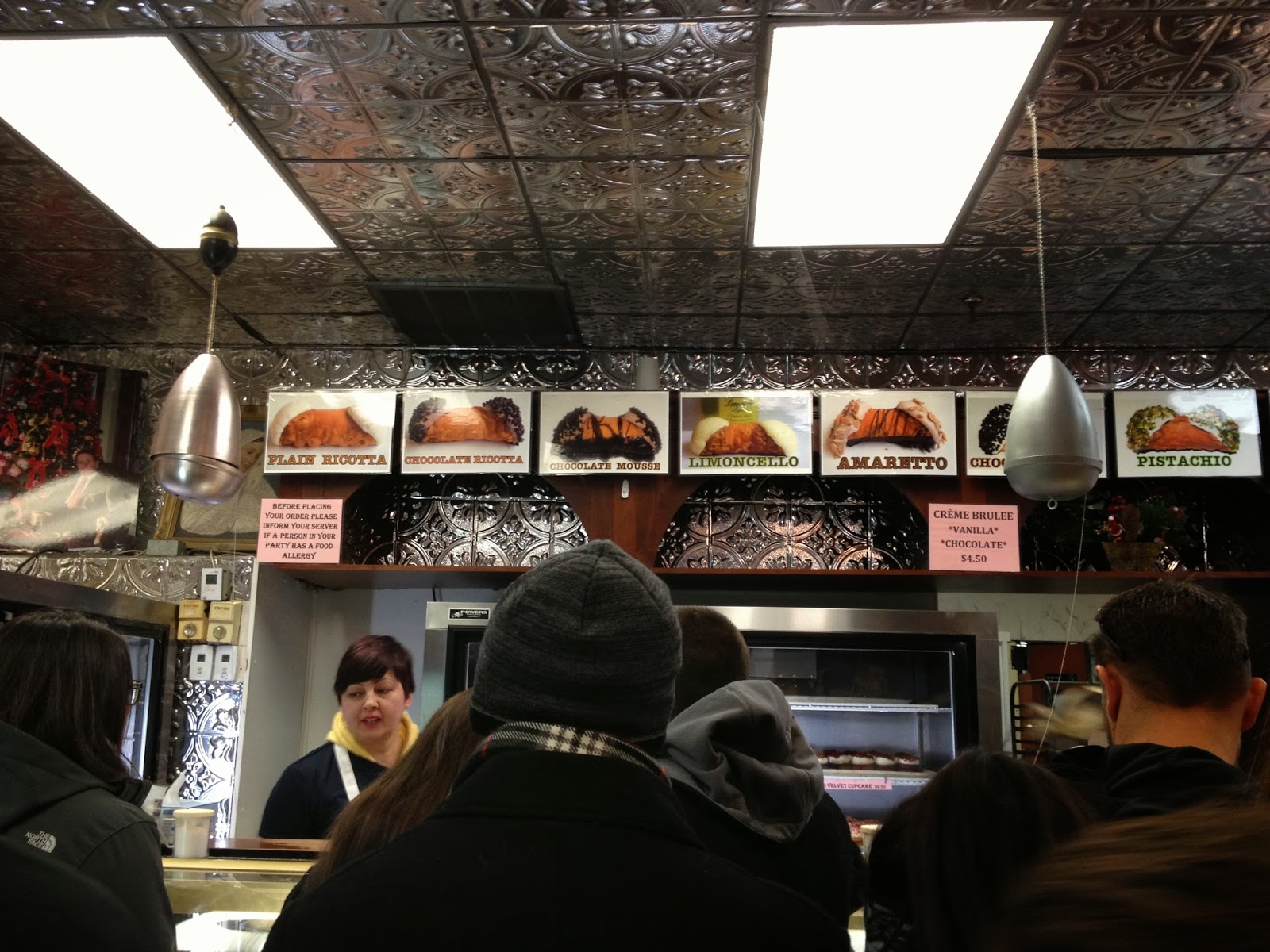 Note the beautiful stainless steel that lines the walls and ceiling. And those silver UFOs hanging from the ceiling? Those aren’t lamps, they’re string dispensers to tie your to-go boxes. Adorable! Look at all those flavors! Not to mention a packed house. 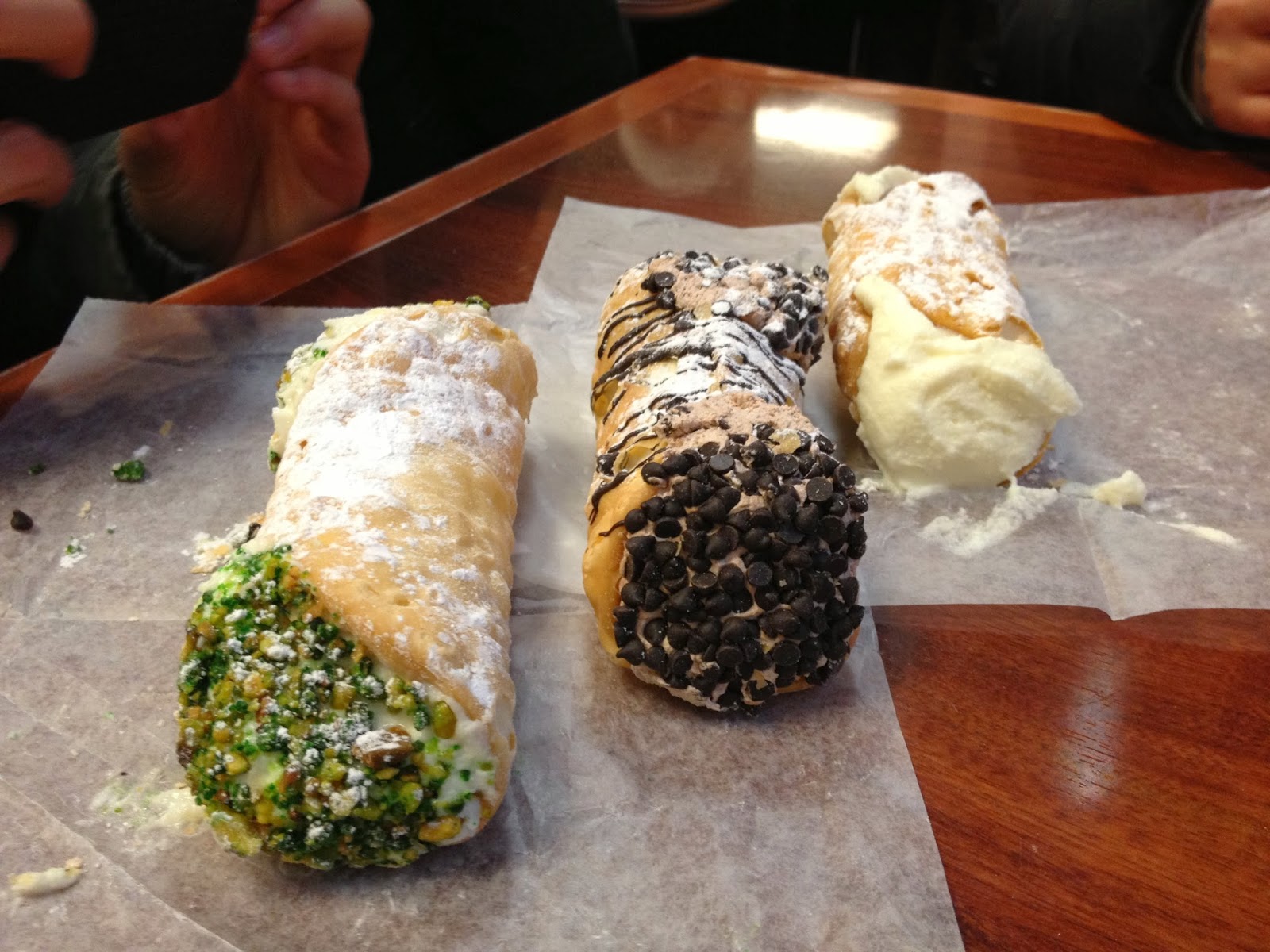 After much mulling over the vast flavor options, we decided to try the Pistachio Cannoli, the Chocolate Mousse Cannoli, and the Ricotta Cannoli. Even before chowing down, we enjoyed the variety of color and ingredients before us. 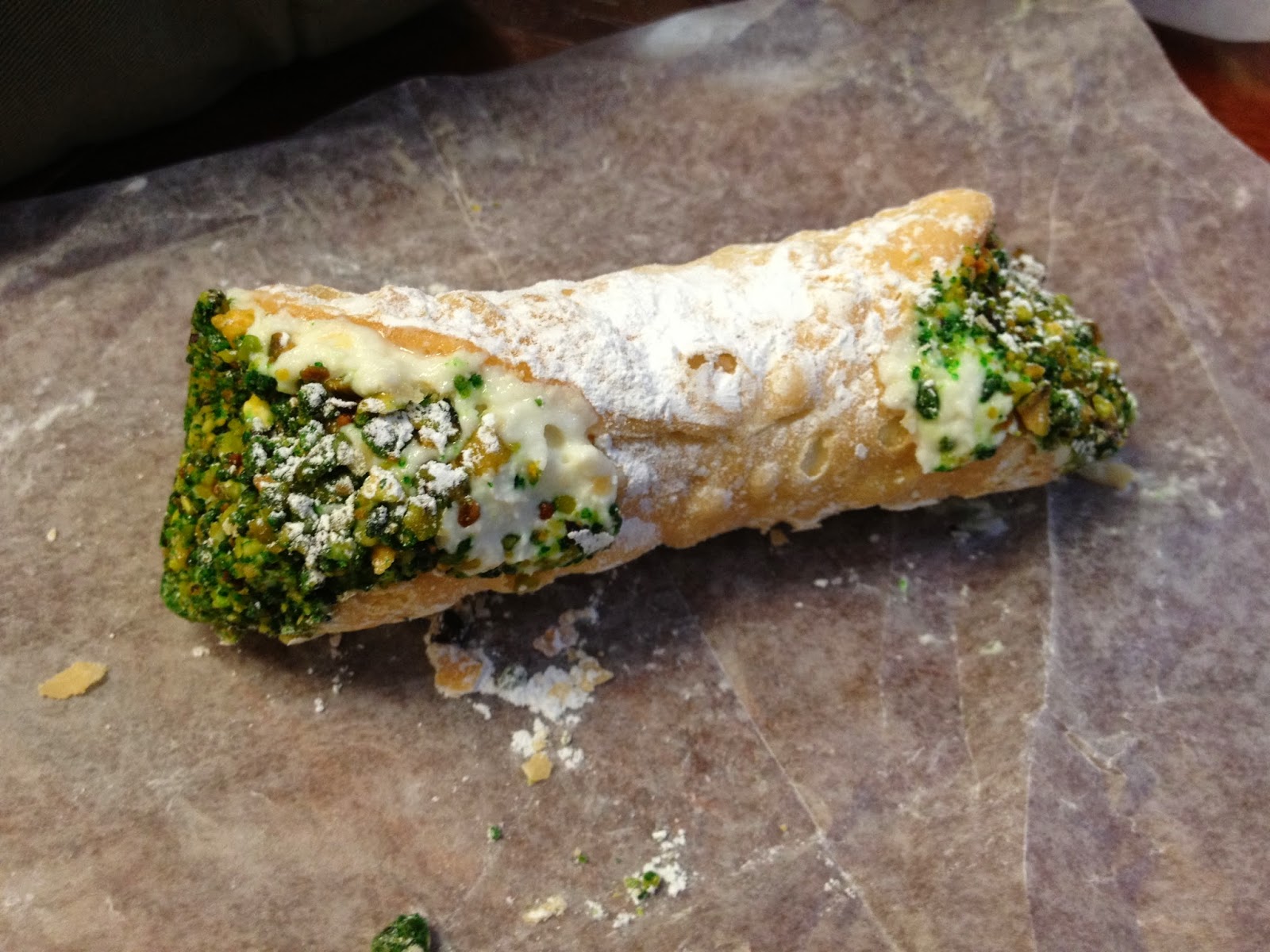 With its fresh green adornments, the Pistachio Cannoli was my favorite. The bright forest glow really allowed this cannoli to stand out and entice the senses. In a bakery like Mike’s, where the portions are pretty generous and the ingredients rich with flavor, the sweets can get overwhelming. These savory pistachios act as a great juxtaposition to the sugary overload, and give you the always-sought-after excuse to claim “at least there was something healthy in my treat!” 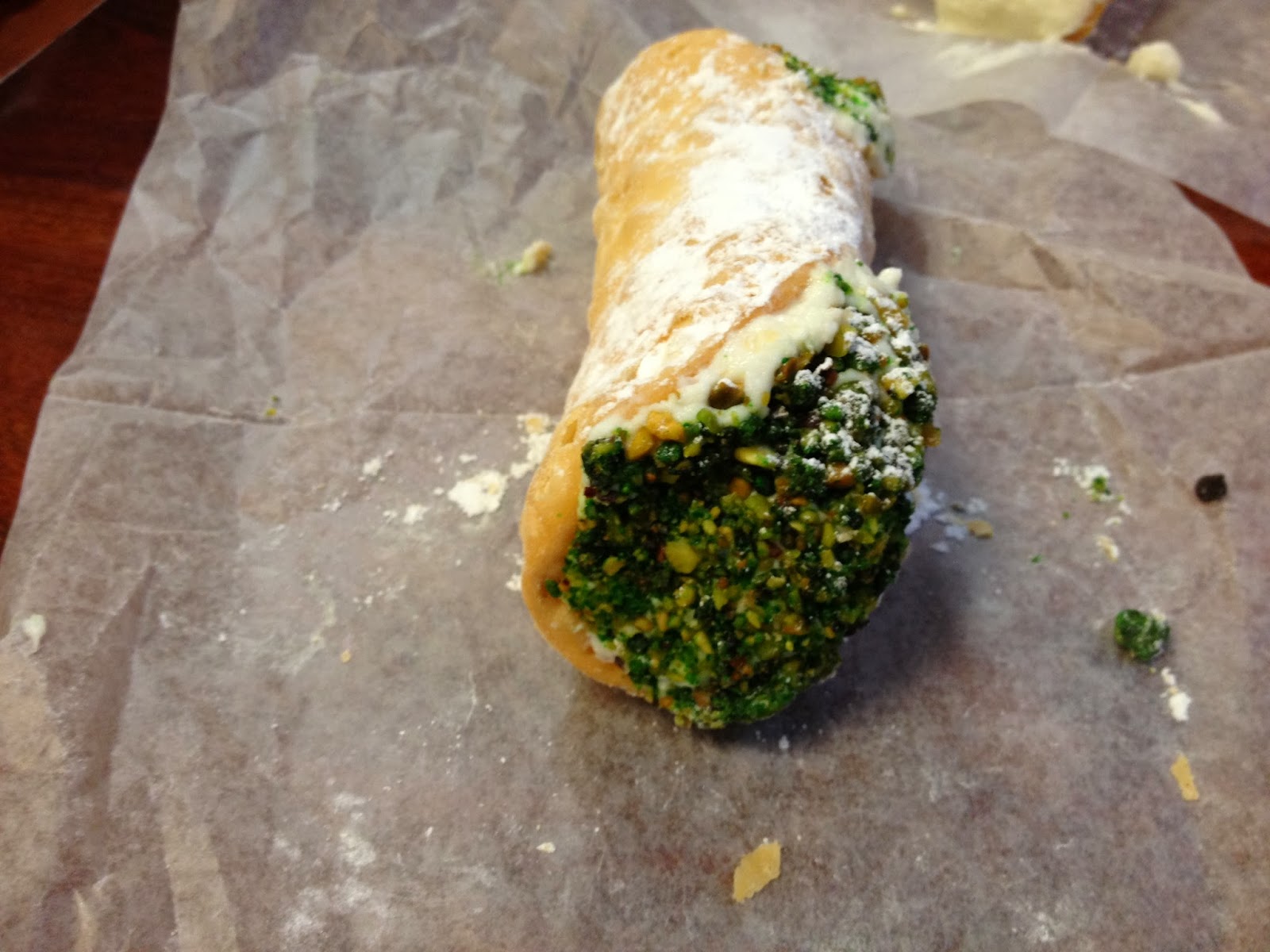 I appreciated that Mike’s does not simply add food coloring and pistachio flavor to their pastries. You can see the actual chopped pistachios in this picture. The only disappointment I had was that the pistachios ended on the outside layer of the cannoli. Inside, I would have liked to see more of the chosen flavor along the entire length of the pastry. 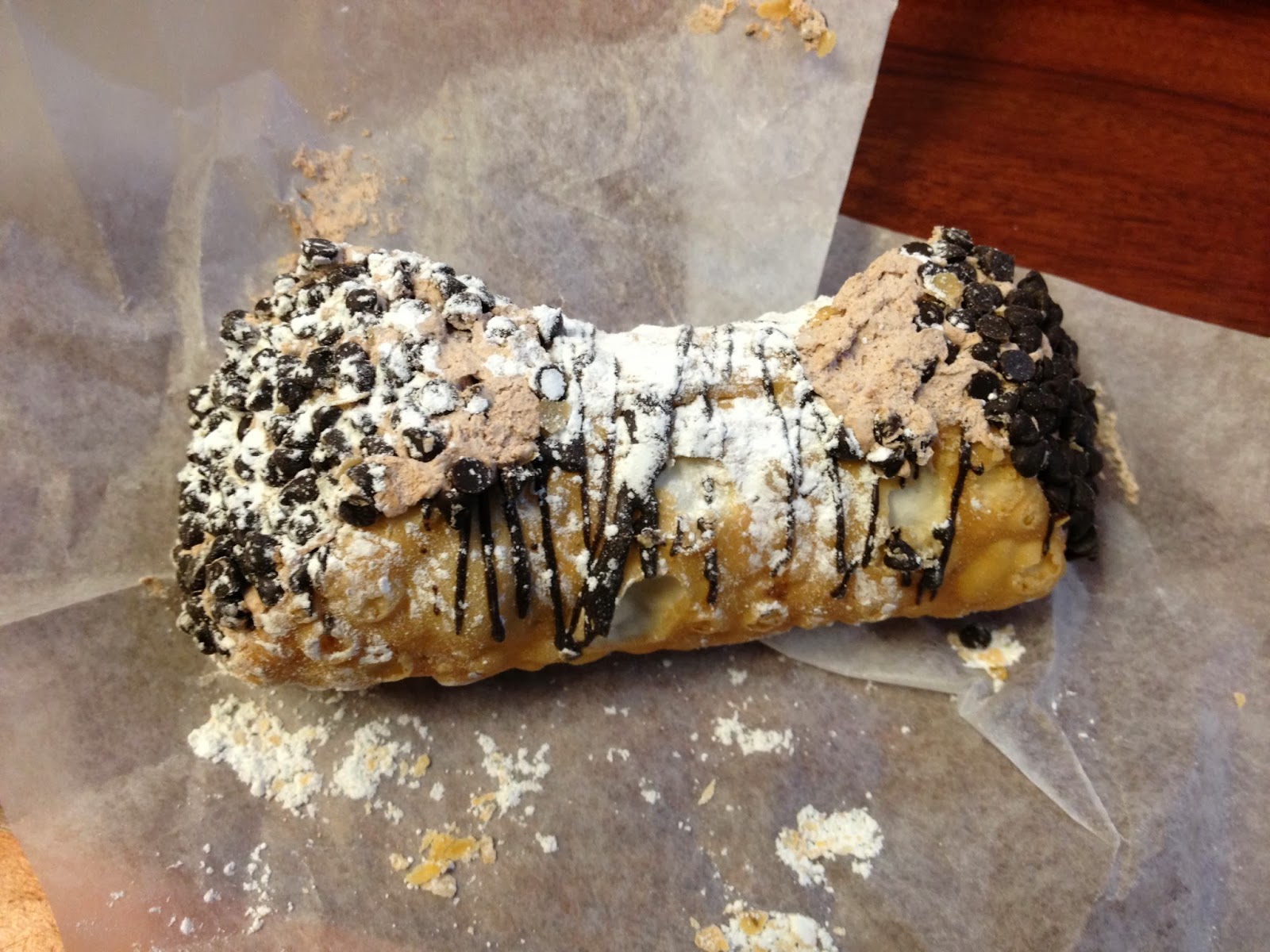 For the die-hard sweet tooth, Mike’s offers the Chocolate Mousse Cannoli. You can really see the flaky outer crust in this picture. It was light and not too heavy at all. The mini chocolate chips were darling and the mousse was light and fluffy. 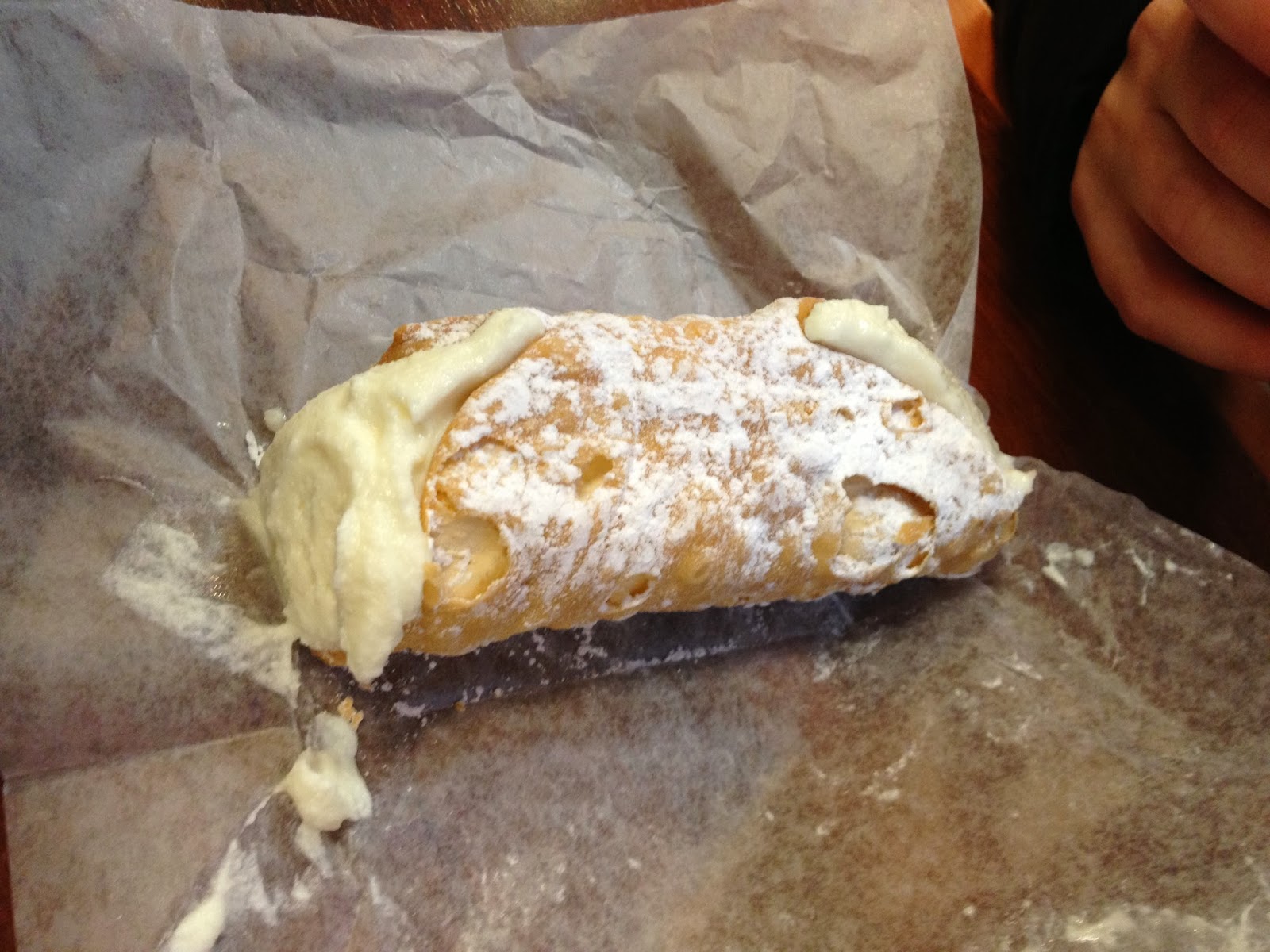 Finally, we have the original Ricotta Cannoli. It may look like a crisp tube filled with only cream, but there is actually ricotta cheese filling in there. Before you go running for the hills, it doesn’t have a strong cheese flavor. Think more along the lines of cream cheese frosting. This one was sweet and a bit richer than the others, but just as delicious.

Bostonians will agree that the best bakery can be found in the Italian North End. The disputes begin when you get more specific. Some say Mike’s is the best, while others swear by Modern or Bova.

I can tell you that Mike’s Pastry is very good. They are always packed with customers and have an unbelievable variety of flavors and hues of cannoli. It was even fun to watch them tie up our order with their elevated string system!

While I have not yet frequented their pastry rivals, I would absolutely recommend Mike’s to anyone in the Boston area. Just be sure to brush your teeth afterwards!