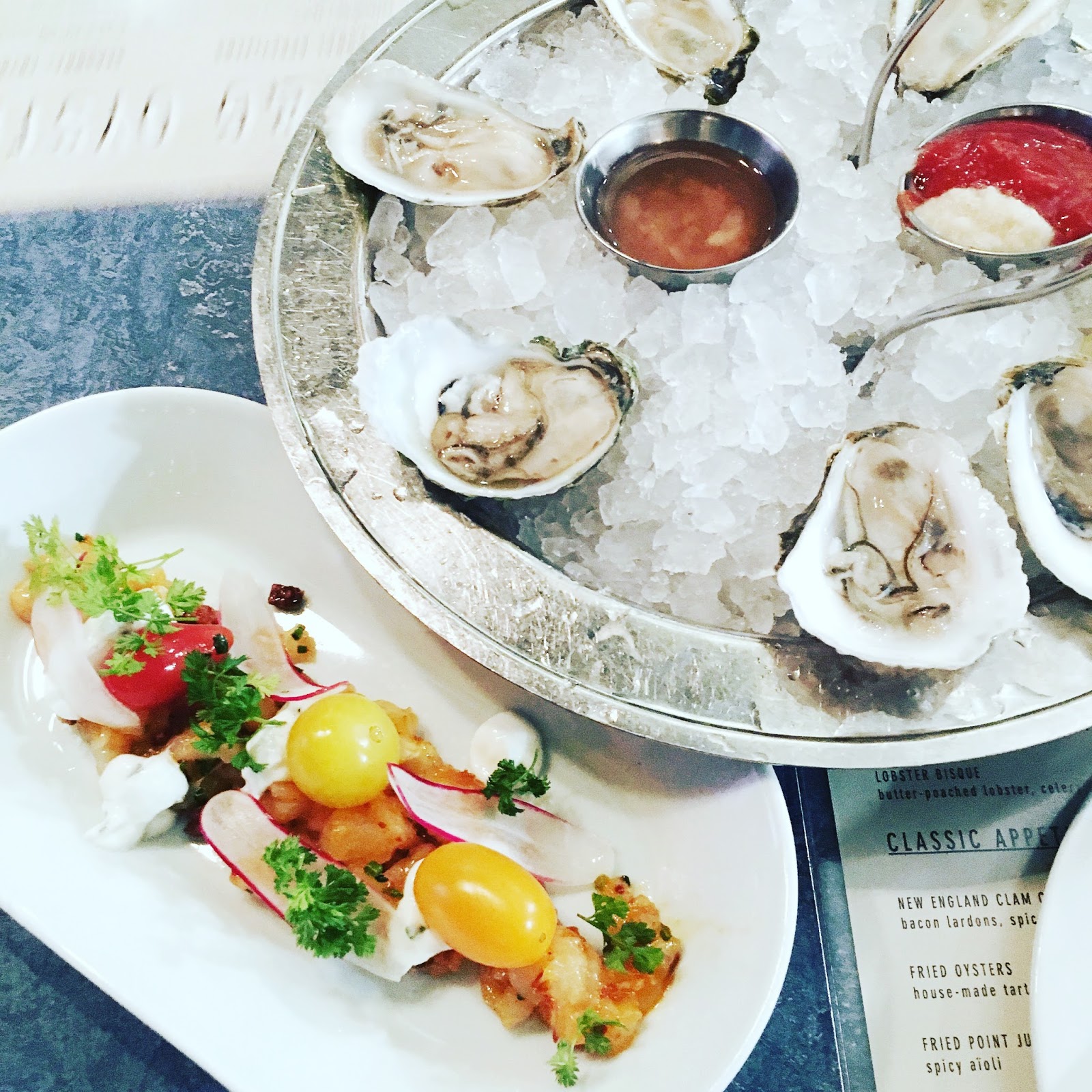 As many of you know, I recently celebrated my birthday! I thought I’d share my birthday dinner with you all, since it was pretty spectacular and one for the books for sure!

Chef Barbara Lynch’s restaurant has been on our list of must-try venues for far too long, so I was super excited to find out that’s where we were going (it was a secret dinner)!

B&G Oysters definitely has a more intimate, neighborhood vibe, while giving the feel of a modern oyster bar. This results in an ultra-trendy atmosphere and electric environment which is so fun to dine in! 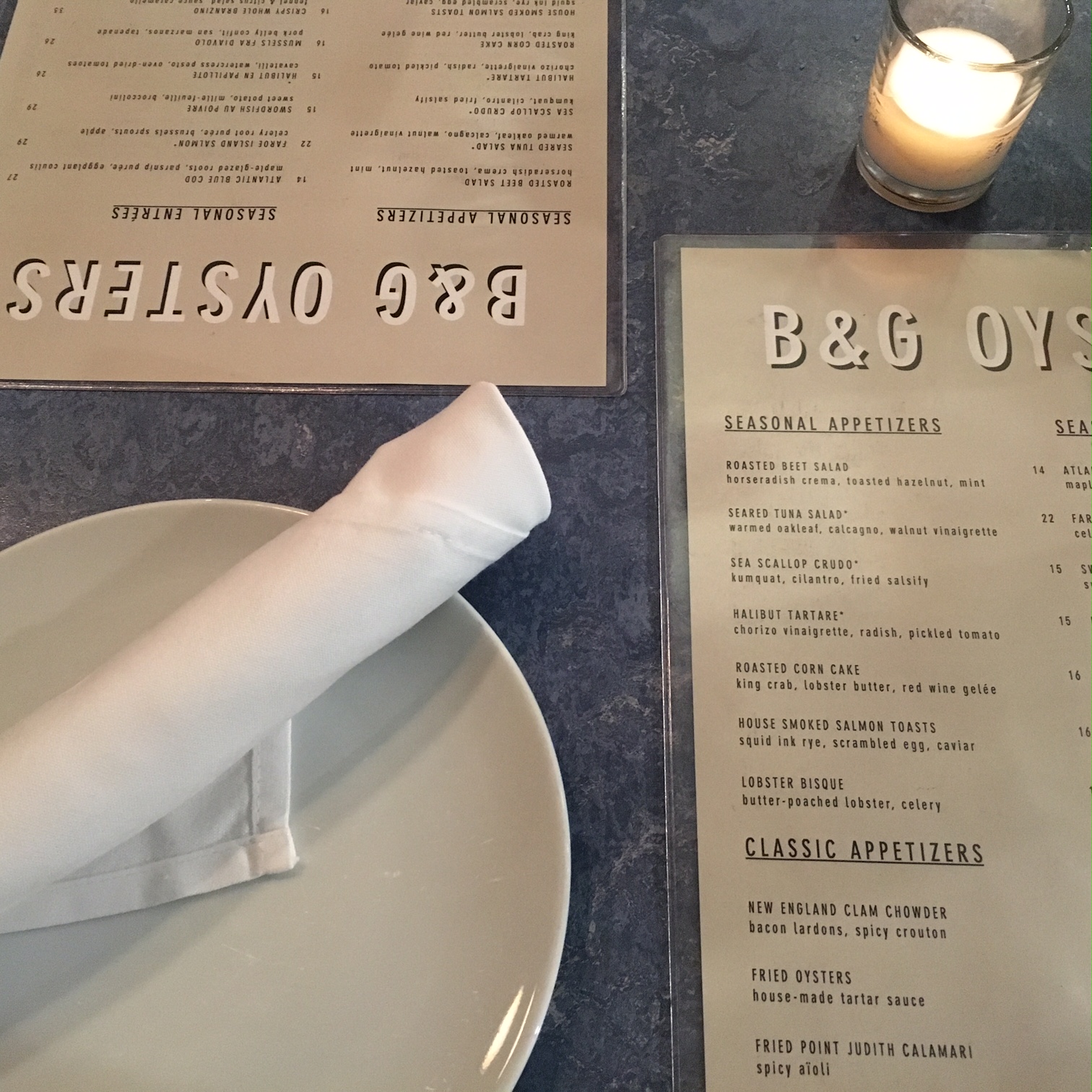 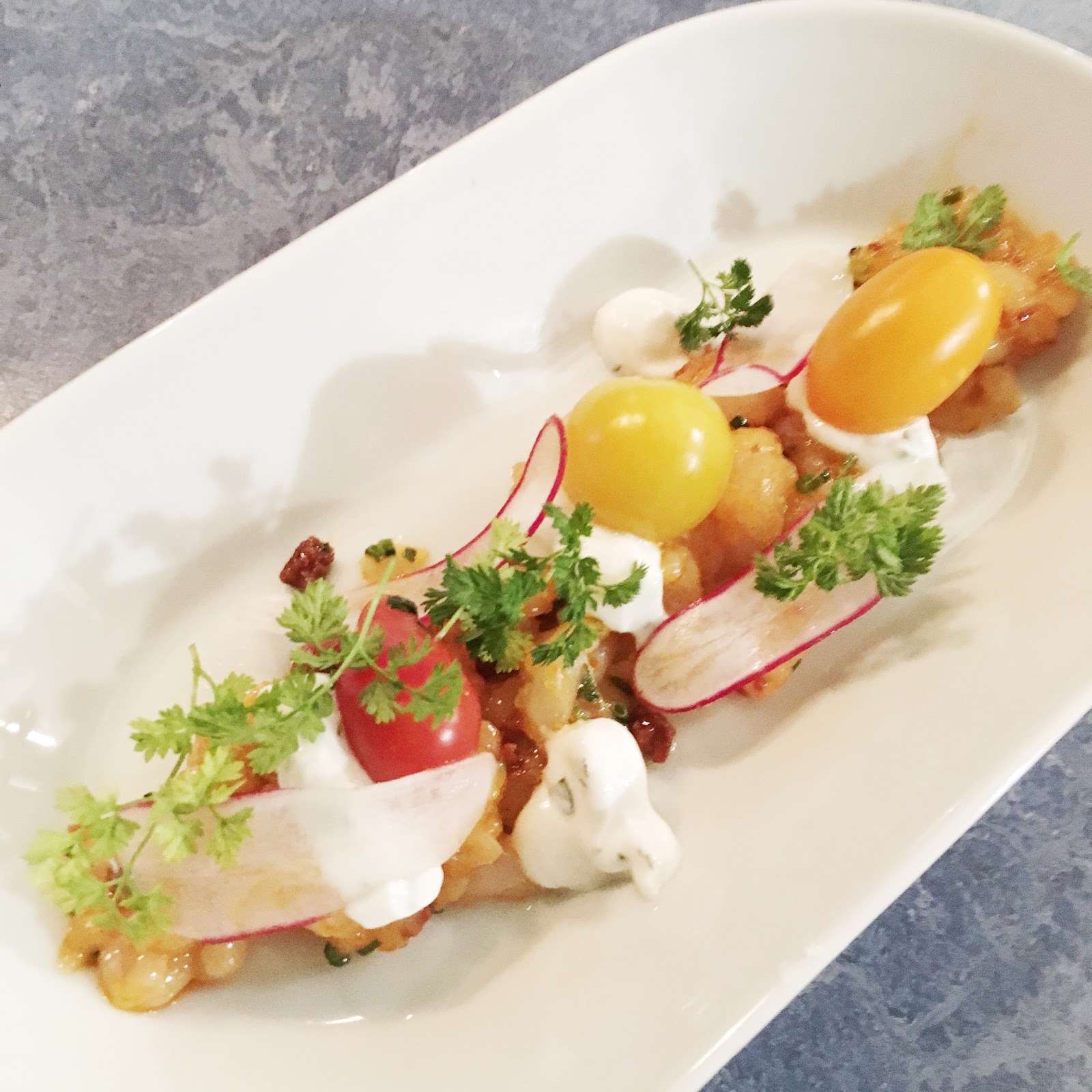 We started with the halibut tartare, which comes with chorizo vinaigrette, radishes, and pickled tomatoes. I usually love raw seafood plates, but wasn’t a huge fan of this one since it had a more earthy flavor (which I hardly ever favor). I was definitely expecting the usual bright, flowery notes that you usually find in crudo or sashimi. It wasn’t until later that we discovered the difference between tartare and crudo – see below!

While dining, we began to wonder what the difference was between tartare and crudo. In case you’re wondering, I ended up looking up the definitions so now you’ll know! Crudo simply means “raw,” so the preparation may vary, but it’s usually served in thin slices much like sashimi in sushi. Tartare, on the other hand, is generally served as a mound of cubed meat or fish. In this case, it was a long strip of cubed fish.

The service was pretty amazing. Our waitress fielded our many questions about the menu and offered great suggestions on which oysters to devour. We ended up going with the Cotuit, Wellfleet, and Moonstone oysters.

The Cotuit and Moonstone were both briny, so you could really taste the ocean. I love those because they remind me of the beach and summer trips! The Wellfleet were also very good, with more of a salty flavor. All in all, I would have to say Moonstone was my favorite – due to the ocean notes and it’s ethereal name of course. 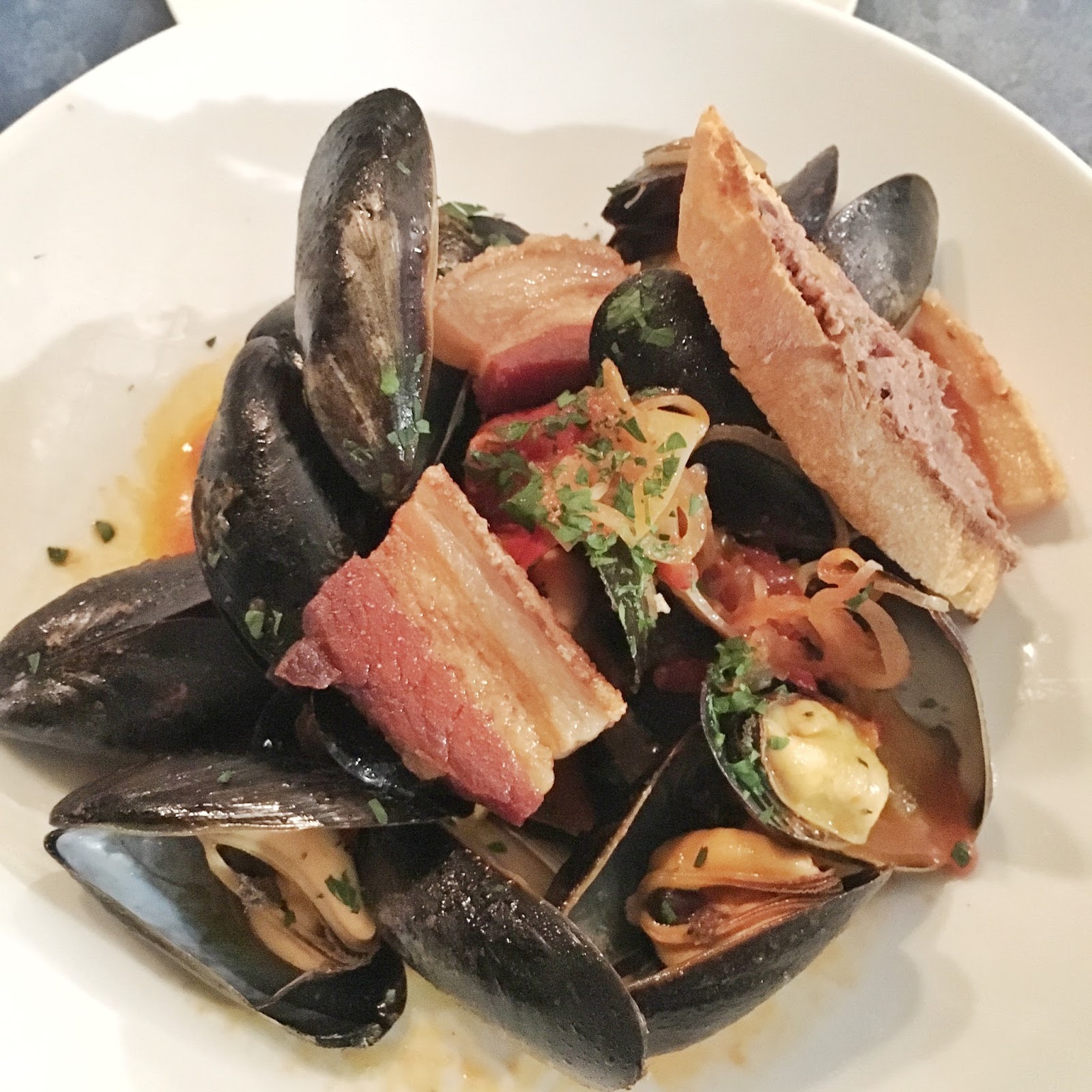 For my entree, I ordered the mussels fra diavolo, which were ginormous and came with pork belly confit, san marzanos (a kind of plum tomato), and tapenade. I’m honestly a mussel fiend – if they’re on the menu, I’ll most likely try them!

This plate really held up as one of the best mussel plates I’ve had for a couple reasons. For one, as mentioned they were truly huge and just felt more substantial. I felt like I could really taste them more rather than just gulp down one tiny mollusk after another. The pork belly not only modernized the plate, since it’s so trendy right now, but it also added more interesting flavors, textures, and substance to the plate. 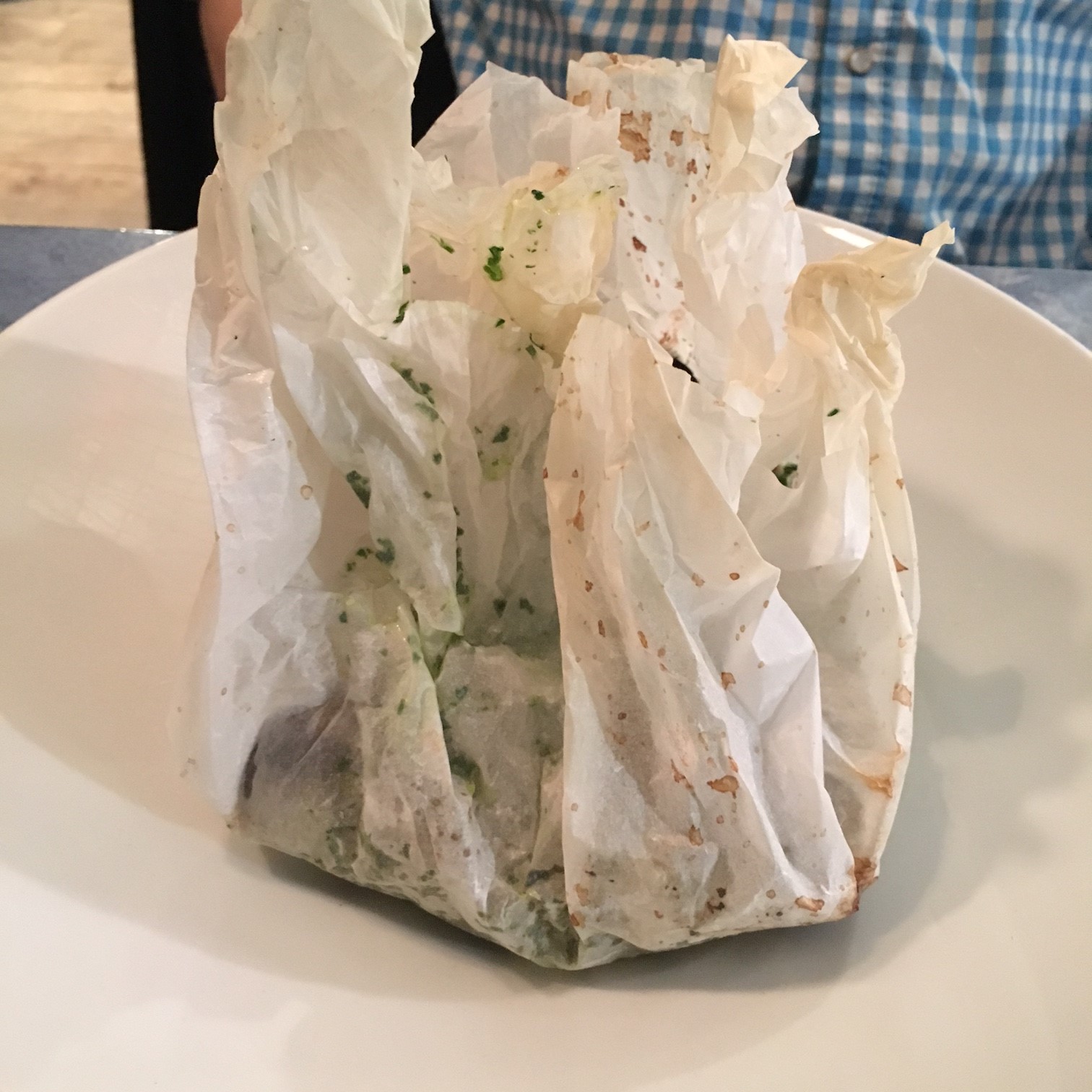 This entree is the halibut en papillote, or “curlpaper,” and yes it comes in this paper on a plate! The presentation was bold and intriguing to say the least, and it felt a lot like opening a present to see what your dish will look like. 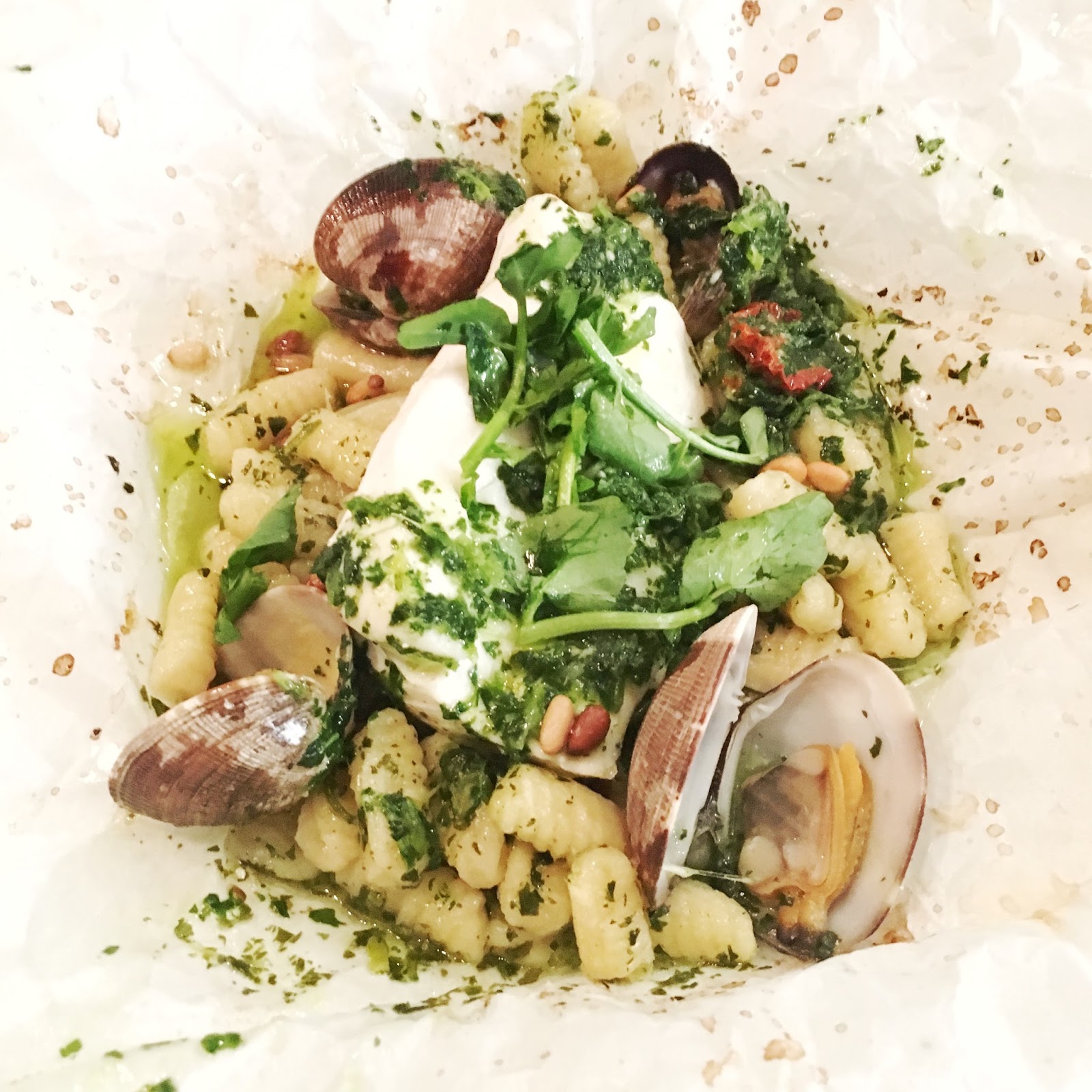 The contents of the papillote: halibut, clams, cavatelli, watercress pesto, and oven-dried tomatoes. The halibut tender and perfectly infused with the myriad of flavors surrounding it. 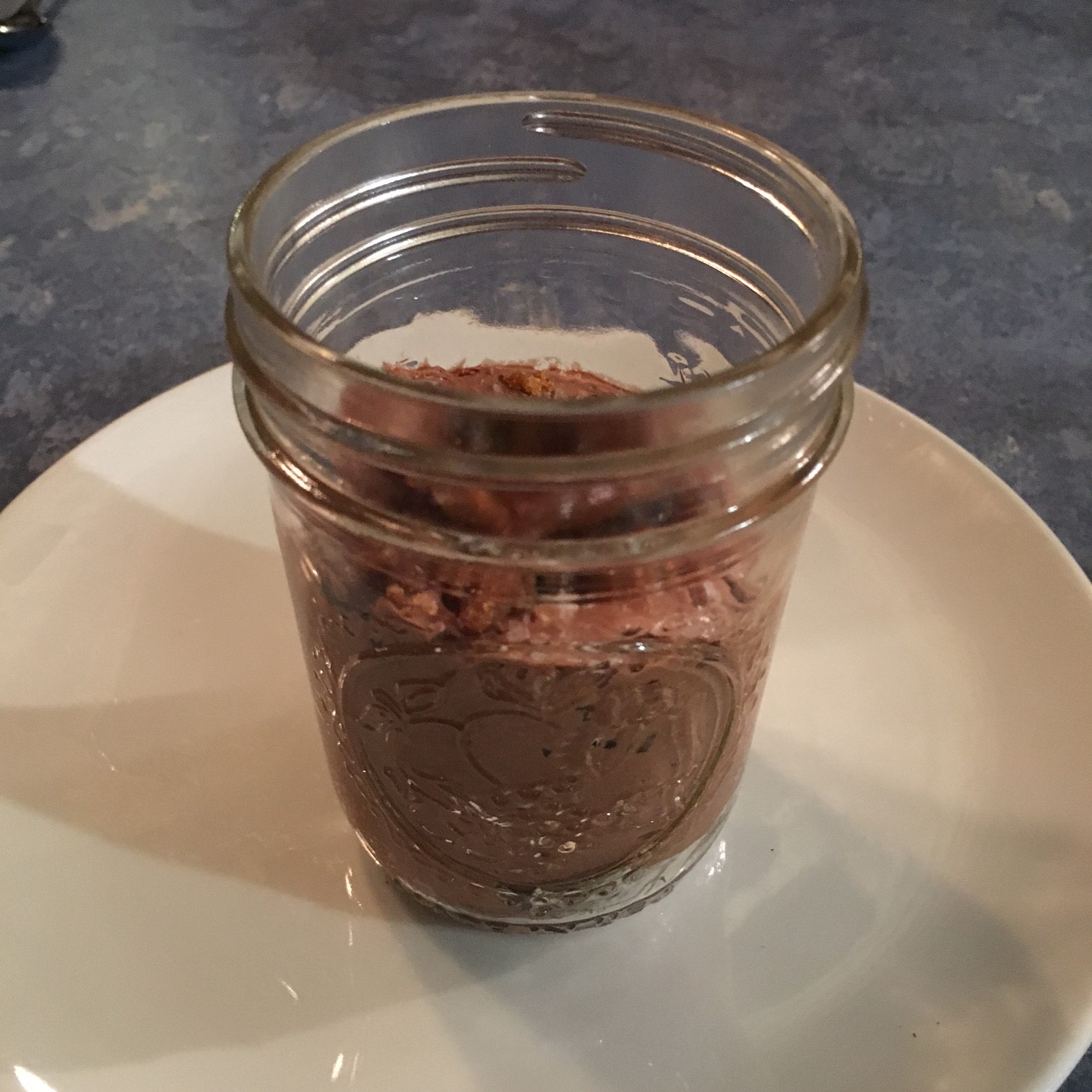 Our chocolate mousse dessert was served in a mason jar, solidifying that this is indeed a modern and trendy restaurant. We thought it would be delicious, as most chocolate desserts are, but this one really blew us away. The mousse contained not only the crunch of a health bar, but also the delicious addition of sea salt. We were full before dessert, but we scooped up every last bit! 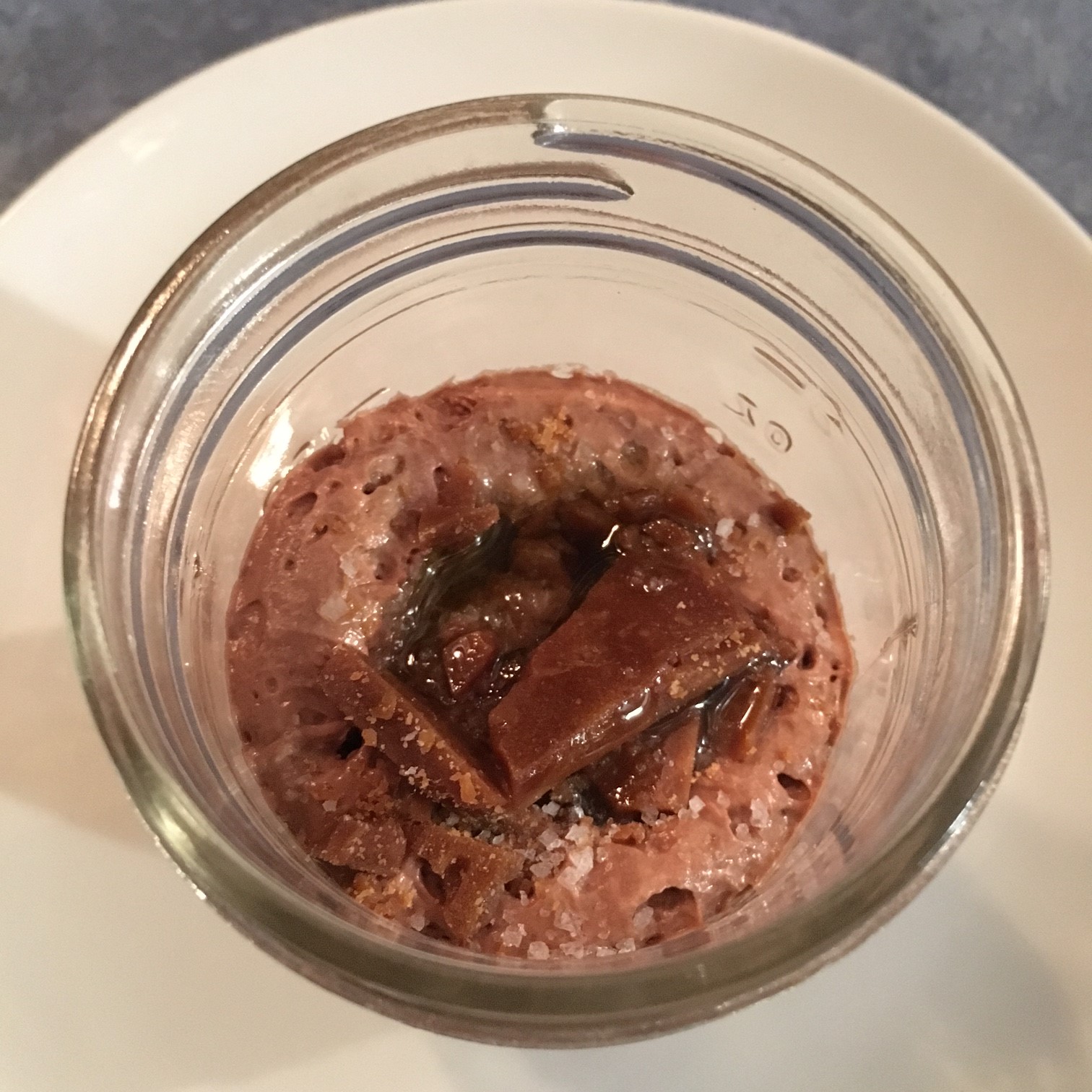 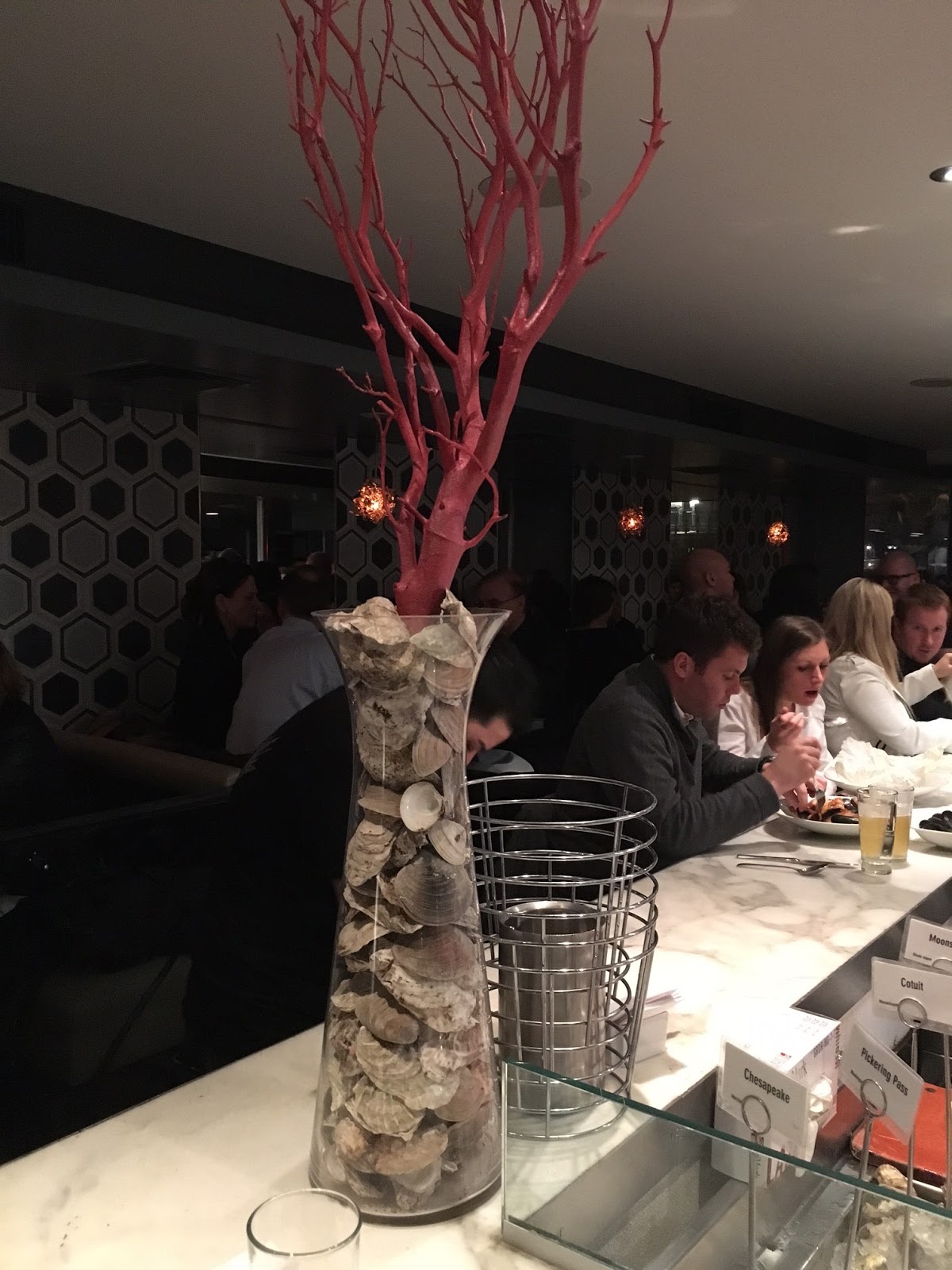 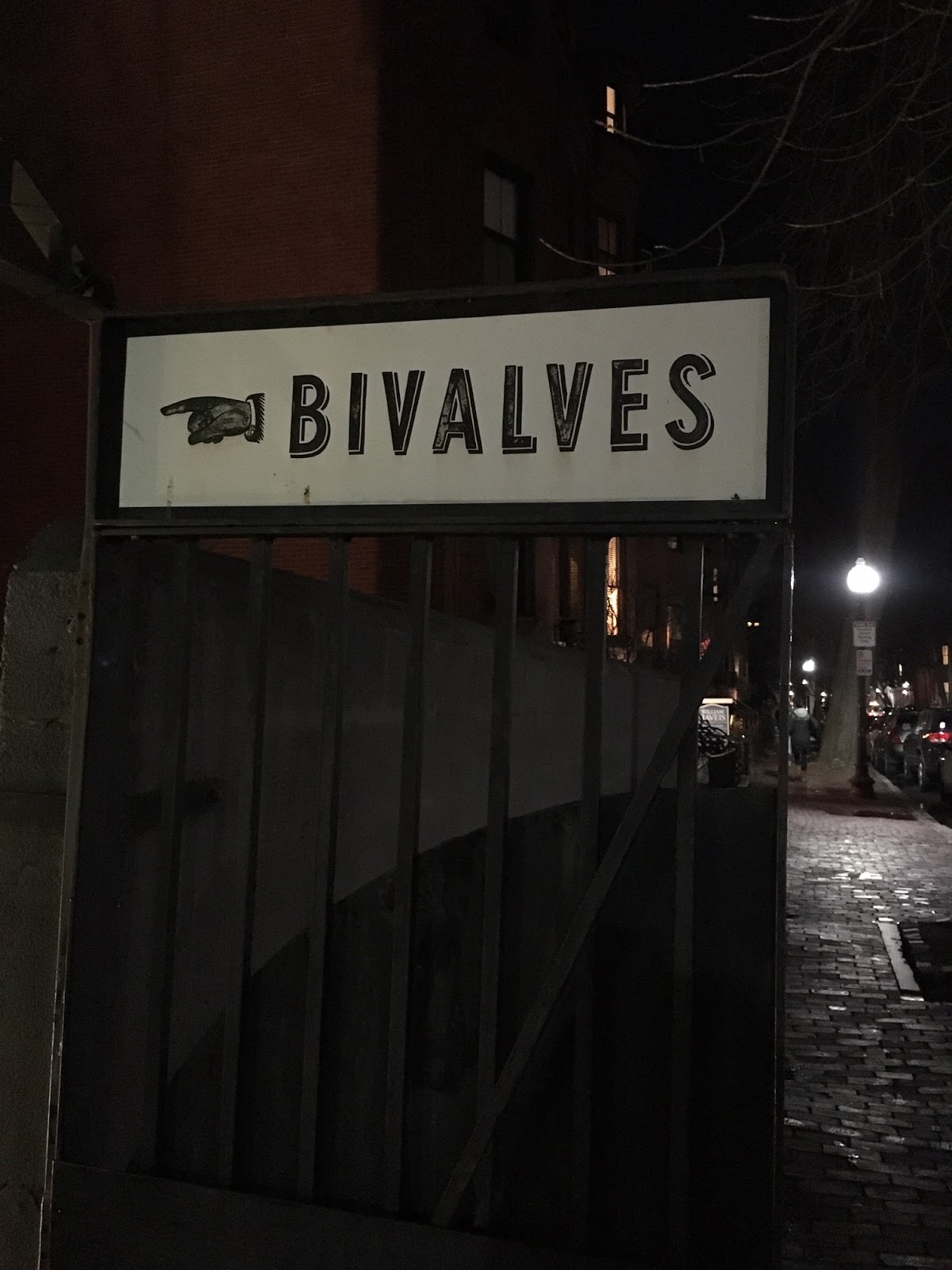 All in all, we had a really nice time at B&G Oysters. The service was great, the atmosphere was fun and we left feeling like we tried some new things and learned a little something along the way!

Be sure to check out my fun birthday dress if you haven’t seen it yet, and if you’re looking for more oyster bars I’ve got you covered!